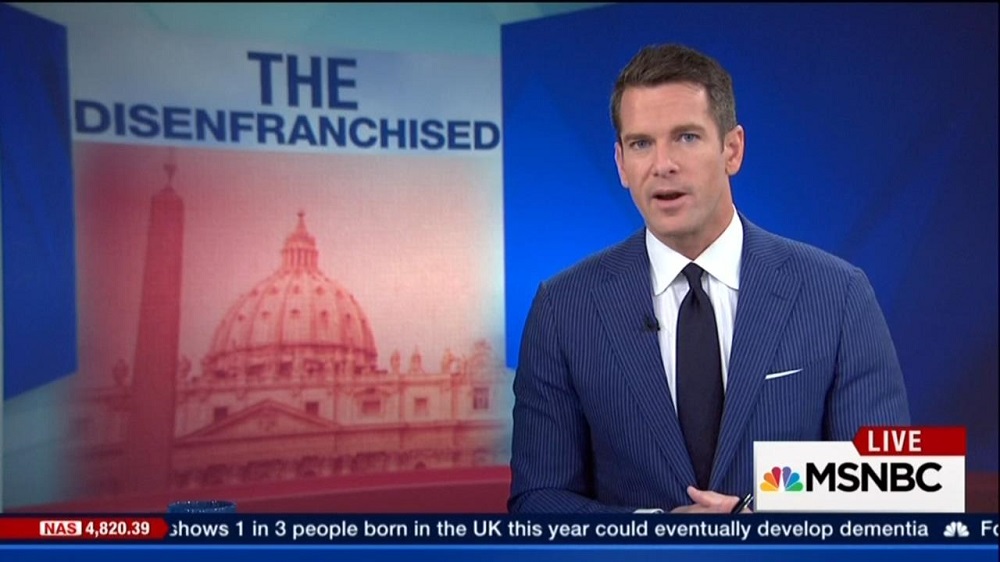 Thomas Roberts set aside four full segments on his MSNBC Live program on Monday and Tuesday to a panel of six Catholics who dissent from the Church's teachings on sexuality and abortion. Roberts hyped his guests as "Catholics like me who have been deeply wounded in life by the Church." He noted how a divorced woman stayed with the Church and asked, "Do you feel as if you're almost on a cyclical relationship with someone that is almost abusive to you, but that you still go back seeking acceptance?" [video below]

The anchor's panel featured Dawn Ennis, an editor for the LGBT publication The Advocate and a 'transgender' Catholic; Catholics for Choice director Sara Hutchison Ratcliffe; three homosexuals who identify as Catholic – former GLAAD spokeswoman Cathy Renna, SiriusXM host/producer Xorje Olivares, and Democratic consultant Kevin Walling; and Denise Suski, a teacher and divorced woman. On Monday, Roberts introduced his first segment by noting that he "had the opportunity to sit down with several Catholics who will see the Pope in person this week. These are pro-choice advocates, divorced Catholics, and members of the LGBT community – who all feel they're part of this church – even though the Church's doctrine has traditionally left them out."

During this first portion of the panel discussion, the openly-homosexual journalist asked his guests what they would say or do if they met Pope Francis. Midway through the segment, Roberts asked Ennis, "Dawn, for you, your questions would be more about disqualifying your humanity and your Catholicism – correct?" The Advocate editor replied, in part, that "what strikes me most about this pope is whenever he talks, he seems to say great things. Whenever he writes something, it's – like, awful. Of course, the written word is what's going to stand."

Fifty minutes later, Roberts aired the second part with his panel of assorted dissidents. He let most of them badmouth Pope Emeritus Benedict XVI:

THOMAS ROBERTS: Benedict is still living, and Pope Francis has referred to him as almost a grandfather figure. But Denise, what is Pope Benedict – one word to describe Benedict? 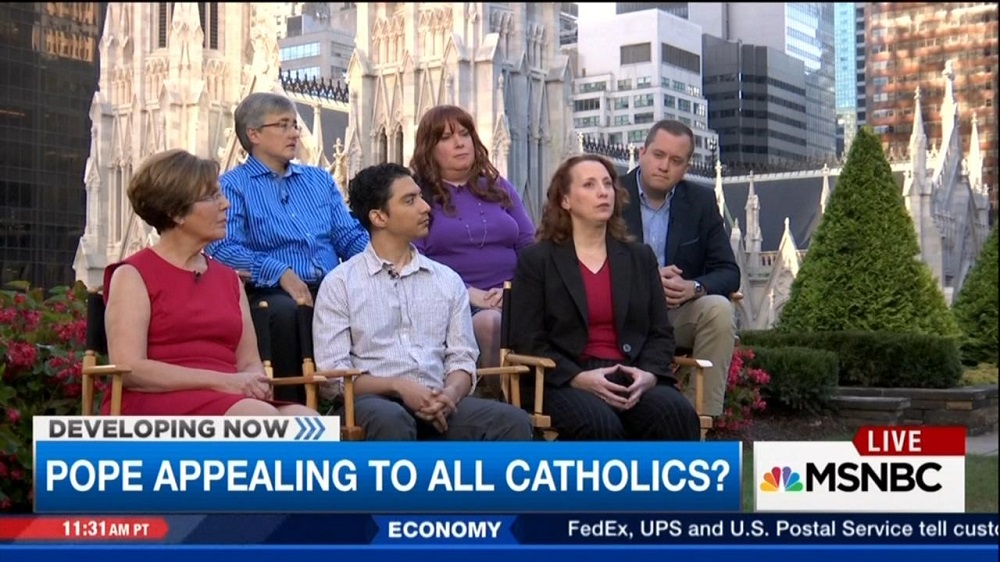 ROBERTS: 'Entitled.' Why do you say that?

RENNA: Because I think he just felt that – you know, he was just in a position of power, but – but he didn't use that power in a way that was appropriate.

The following day, the MSNBC anchor introduced his third segment with his "deeply wounded" line. He led with the sex abuse scandal, but soon made quite a revealing admission about his own relationship with the Catholic Church:

ROBERTS: I was so compelled and interested in doing this panel, because I'm openly gay; I'm married to my husband; and I'm also a survivor of sexual abuse through the Church. One thing I struggle with – because I still have a deep connection to my faith – it's a warmth and a chill. And I resent, when I go to Mass, 'clean' Catholics. I resent a pureness that they have that I won't have. Do any of you ever look around Mass and resent a purer connection that other people feel? No? I'm on an island?

Roberts dropped his comparison of the Church to an abusive spouse towards the end of the fourth portion of the panel discussion, as he focused on Suski, the divorced woman:

ROBERTS: Denise, let me ask you about that specifically – especially when it comes to what it means to be married in the Catholic faith – because you are divorced from your first husband.

ROBERTS: And that was an interfaith marriage.

ROBERTS: And you had one son-

ROBERTS: And you had him baptized?

SUSKI: I did have him baptized Catholic.

ROBERTS: That ended in divorce?

ROBERTS: Did you seek an annulment?

ROBERTS: And what happened when you tried to get married to your second husband, who was Catholic?

SUSKI: We married in the Lutheran church.

ROBERTS: And you had one daughter?

ROBERTS: Who you baptized?

ROBERTS: So you continue going back to the Church. Do you feel as if you're almost on a cyclical relationship with someone that is almost abusive to you, but that you still go back seeking acceptance?

SUSKI: I don't think I seek acceptance from them. I really feel, in my heart, that – in terms of the way that life really goes – that I was a good parent; that I am still a good person. And that I shouldn't be ostracized and not be allowed to receive Communion – which I really believe in – because the Catholic Church deems me not qualified to do that.

Earlier, he again turned to Ennis and asked, "So you feel comfortable, as a woman walking into church, knowing what Church teachings have been about the transgender community – how the Pope has recently said that they would not be acceptable as godparents?" The editor responded, "Not only that, but...the Pope, in his writings, called us as bad as nuclear weapons. Comfortable is not the right word. I consider them my crazy aunts and uncles." So much for "tolerance" from the supposedly "open-minded" crowd.