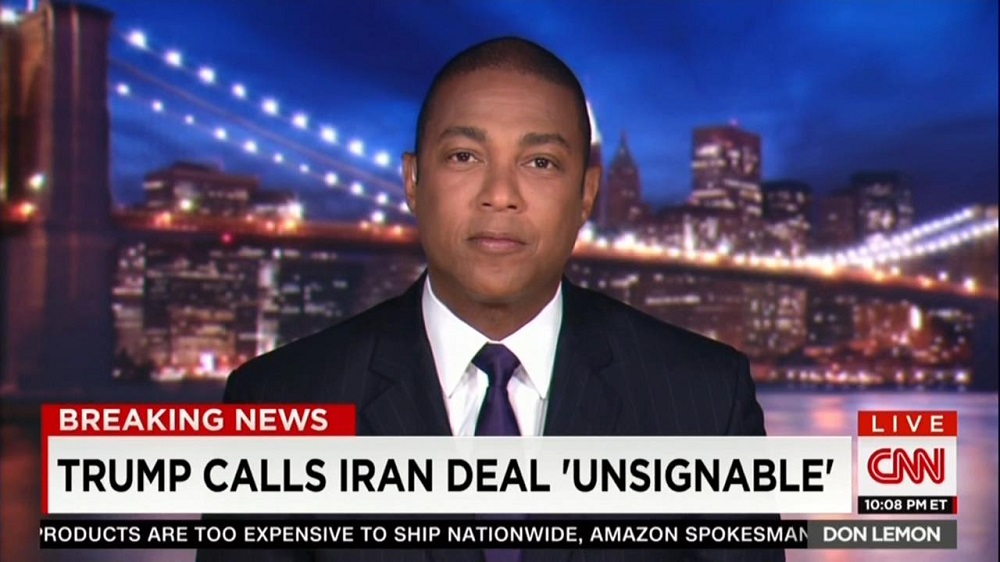 On Tuesday's CNN Tonight, Don Lemon wondered if some of Donald Trump's rhetoric had thinly-veiled bigotry in it. Trump indicated that the high turnout at his recent campaign rallies was "a great tribute to what we're all saying. We want to make our country great again." Lemon misquoted his guest in his follow-up question: "You said...it was a tribute to people wanting to take their country back – because I know you've heard the criticism...people out there saying it is a dog whistle...there's some sort of racist intent behind it. Can you please respond to that?" [video below]

The anchor interviewed Trump for the majority of his hour-long program. Lemon brought up how the billionaire once underlined that he has "lived in New York City...all of my life...So, you know, my views are a little bit different than if I lived in Iowa." He then asked, "Are you worried that people there might see this as a bit of an insult that – you know, 'New York is not the same as Iowa'?" Trump responded, in part, that he didn't mean it as an insult, and played up how "every time I go to Iowa, I have the most incredible receptions."

Lemon responded to this boast by asking, "When you see that many people, what did you think?" The presidential candidate replied, "Well, I think was a great tribute to what we're all saying. We want to make our country great again. These are people that are really wanting to make this country great." He continued with an extended condemnation of the Obama administration's nuclear deal with Iran.

The CNN journalist then asked his "dog whistle"/"racist intent" question. Trump denied that this was the case: "No, I think the phrase that they're talking about is the word (sic) 'silent majority.'...There is a silent majority out there that, actually, is becoming much less silent."

It should be pointed out that several prominent politicians have used the "take our country back" over the years – including then-Senator Barack Obama, Vice President Biden, Hillary Clinton, and Howard Dean.

The transcript of the relevant portion of the Donald Trump interview from Tuesday's CNN Tonight:

DON LEMON: The question is – is that, because of the Iowa polls – you know that you're leading in the polls – right?

LEMON: And there's some polls that are saying that you're – you're tied with Ben Carson. Are you worried that people there might see this as a bit of an insult that – you know, 'New York is not the same as Iowa'?

TRUMP: No. I don't mean it as an insult. I think the values of the people in Iowa are incredible. But it is – it is somewhat different when you're living in this huge – you know, metropolis – this huge city – the views have – have a tendency to be somewhat different. I mean, all you have to do is look at voter profiles.

But my relationship with the people of Iowa has been great. Every time I go to Iowa, I have the most incredible receptions. And – and that goes, in all fairness – New Hampshire, where we had, as you saw, tremendous turnouts; and Iowa – had tremendous turnouts – South Carolina. The other day, we were in – two weeks ago, we were in Alabama. We had 30,000 people in a stadium. You know, the turnouts have been absolutely tremendous, and – you know, the people-

LEMON: You know, I saw that. I saw that – honestly, though. When you see that many people, what did you think?

TRUMP: Well, I think was a great tribute to what we're all saying. We want to make our country great again. These are people that are really wanting to make this country great. They hate to see what's going on – whether it's the horrible deal with Iran that – you know, that – a baby could negotiate a better deal than that. And I like the idea of a deal, but they should have doubled up the sanctions for another couple of months – and they would have come to the table, and they would have been begging to make a good deal. We don't get our prisoners back. They have 24-day inspections.

You know, there's something in the Iran deal that people, I don't think, really understand or know about – and nobody is ever to explain it – that if somebody attacks Iran, we have to come to their defense. And I'm saying, does that include Israel? And most people say, yes – they don't have exclusion for Israel. So, if – if Israel attacks Iran, according to that deal, I believe, the way it reads – unless they have a codicil, or they have something to it – that we have to fight with Iran against Israel. Now, you tell me – I mean, you're the one that does this professionally for a living – what does this agreement say? If that's the case, I think it's – it's unsignable. How can you possibly sign such a thing?

LEMON: Let's talk about – you said – you know, it was a tribute to people wanting to take their country back – because I know – I know you've heard the criticism – that that phrase was used with Nixon – and people out there saying it is a dog whistle to some, sort of – there's some sort of racist intent behind it. Can you please respond to that?

TRUMP: No, I think the phrase that they're talking about is the word (sic) 'silent majority.' You know, when you have the word 'silent majority' – to me, it's just a very obvious phrase. There is a silent majority out there that, actually, is becoming much less silent – because when you look at Iowa and the crowds I have – and those people are going wild to – you know, with enthusiasm; and you look at New Hampshire – it's the same thing; and you look at that football stadium with 30,000 people – they are – are not so silent anymore.

TRUMP: And nobody can understand why we can't negotiate a far better deal than that. And I cannot understand that, because I think that's negotiating 101. There is no way that that deal should be approved.

TRUMP: A complete disaster for Israel.