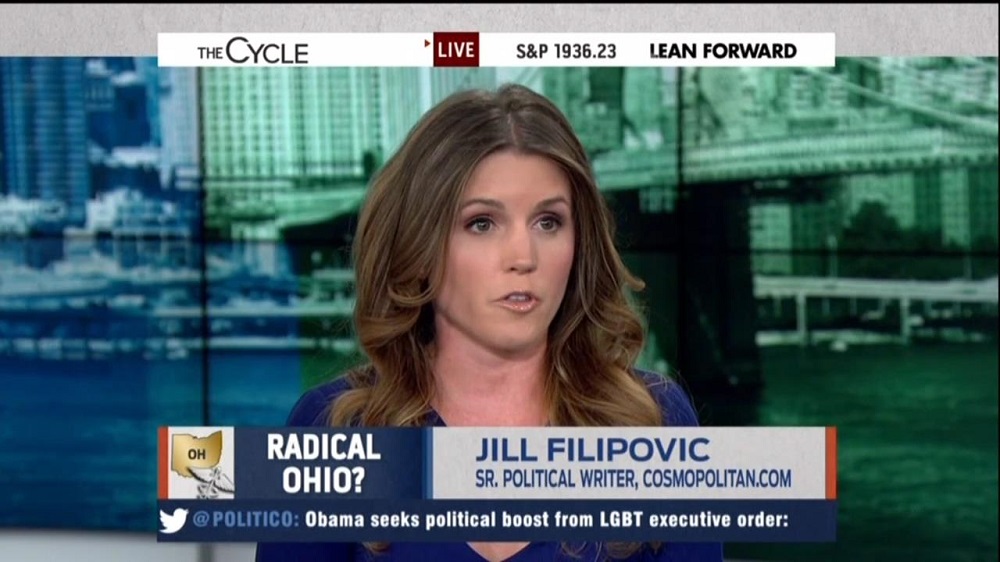 Jill Filipovic unleashed against Twitchy in a Wednesday item on Cosmopolitan's website. Filipovic decried how she had been "Twitchied," after she defended Planned Parenthood immediately after the Center for Medical Progress released its first undercover video on the abortion giant's harvesting of unborn babies' organs and tissue. She underlined that the conservative site's "role as an organized harassment tool is almost never discussed," and contended that "going after liberals seems to be a part of their mission, but they also tend to single out women and people of color."

Filipovic led her article, "The Right-Wing Hate Machine," with an account of how she "tweeted out relevant information" about the first hidden camera video on Planned Parenthood on the day it came out. She asserted that her aim was "to clarify that the group releasing the video, the Center for Medical Progress, was not actually a medical organization but anti-abortion activists posing as medical professionals." She continued with a summary of the nasty messages she received on Twitter, after Twitchy spotlighted her responses to the first video.

A few hours after sending out those initial tweets, the @ replies column of my TweetDeck went nuts. Tweet after tweet after tweet streamed in. I was a life-hating bloodthirsty ghoul; a soulless bitch; pro-dead-babies-incinerated-as-biohazardous-trash; a sad, degenerate monster; a fucking heartless beast; a human sewer; the female Hannibal; a soulless wino psychopath; an ignorant twat; a Caitlyn Jenner look-alike; an Obama taint-licker; a dumb, sniveling fuckwhistle; perhaps "some type of transgender"; nasty skank trash; and an elitist snot (that one came with a photo of dozens of dead children), among other pleasantries.

The pro-abortion writer (who decried how "we've become essentially a country of have and have-nots when it comes to abortion" in June 2014) failed to cite what her Twitter posts actually said. The Twitchy post from July 14, 2015 documented that Filipovic attacked the Center for Medical Progress as "anti-choice internet yahoos," just two minutes after she underlined that the organization is "not any sort of medical group. It's an anti-abortion group." In the following 15 minutes, she continued that it was "just a reminder to consider the source when you see headlines about 'medical groups' conducting sting operations on #PlannedParenthood," She then asked, "Has anyone seen the actual names of the people who run "The Center for Medical Progress"? $10 says they'll be familiar anti-choice activists."

After documenting some of the other insults she received that day, Filipovic gave a short history on Twitchy, noting that the site was "founded in 2012 by conservative blogger Michelle Malkin...[and] has half a dozen editors who troll Twitter for content to post; each post consists of a tweet or series of tweets along with some brief and often outraged commentary. Malkin sold Twitchy to Salem Media, a for-profit Christian company in 2013, but the religiosity of its new owners has not shifted its acidic content." She continued that "Twitchy is not the most aesthetically pleasing site, nor is it the most sophisticated. The site uses headlines that read like poor Upworthy imitations."

The liberal Cosmopolitan contributor then asserted that Twitchy's "purpose seems to be filling insatiable reader rage. Many of the tweets posted to Twitchy are put on there seemingly for the express purpose of demonstrating how stupid or evil Twitchy believes the tweeter to be." She quoted from controversial University of Pennsylvania professor Anthea Butler, who claimed that the site "sent hordes and hordes of people to my Twitter feed, [their readers] called Penn, it was like a nightmare....I'm an academic. When people are calling me 'nigger' and 'bitch' and 'look at you, you're just a fat slag,' it's all about your physiotype....I'm a very strong person, and although I did not lose faith in myself, I lost faith in humanity."

Filipovic used her quotes from Professor Butler as a lead-in to her contention that Twitchy "tend[s] to single out women and people of color." She bemoaned that on "one recent afternoon, most of the people negatively singled out by name and photo on Twitchy's front page were women: Hillary Clinton, Mia Farrow, Debbie Wasserman Schultz, Nancy Pelosi, Wendy Davis, Planned Parenthood president Cecile Richards." She added that "the folks being applauded were mostly white men (actor Adam Baldwin, conservative Weekly Standard editor Bill Kristol)."

The writer then underlined that "many women say when they are put on Twitchy, the responses are sexualized and sexist; for people of color, a Twitchy post means a waterfall of racism." Besides additional quotes from Butler, Filipovic repetedly cited far-left Slate writer Amanda Marcotte, who denounced the conservative website. Of course, she glossed over Marcotte's long history of sliming conservatives, especially pro-lifers.

Filipovic also predictably hyped that "the site is part of a broad and influential network of far-right media, including talk radio, blogs, and cable television." She referenced a "recent paper from Harvard's Shorenstein Center on Media, Politics and Public Policy," where "veteran reporter Jackie Calmes details the scope, depth, and impact of the hyper-conservative media web of which Twitchy is a part: It forces Republican politicians to take radical stances that are both out of step with most of the American public and make it virtually impossible for them to actually govern. The result is an increasingly conservative agenda...and the political gridlock that comes with digging into extremism and refusing to compromise."

It should be pointed out that on Tuesday, Planned Parenthood gave Filipovic their Maggie Award for Media Excellence for her "TV & Online Reporting." The abortion giant recognized the writer for "her piece, 'Why Opponents of a New Planned Parenthood Are Doing Everything in Their Power to Stop It' on Cosmopolitan.com and her subsequent coverage of this issue on Melissa Harris-Perry on MSNBC. This coverage was critical in clarifying misinformation and exposing the harsh opposition on the ground in New Orleans."