Chris Licht: you've got some work to do—or was your stated goal just an empty promise?

The new head of CNN has said he wants the network to become less of a partisan liberal outlet. In particular, Licht has called for on-air people to avoid using Democrat tropes like "the big lie." Mediaite reports:

"Licht argued that using 'the big lie' makes the mistake of adopting branding used by the Democratic Party, thereby weakening the objectivity of the network."

Despite Licht's supposed mandate to lean away from liberal partisanship, and to avoid using Democrat tropes, in the very first minutes of this morning's New Day, discussing yesterday's primary results, co-hosts Brianna Keilar and John Avlon parroted no fewer than three Dem tropes.

In addition to the aforementioned "big lie," the pair broke out two other Dem favorites: "democracy on the ballot," and "election denier."

Both the "big lie" and "election denier" have Nazi roots. Hitler's chief propagandist, Joseph Goebbels, used the term and the tactic to tell a lie so big, and so often repeated, that people would come to believe it. 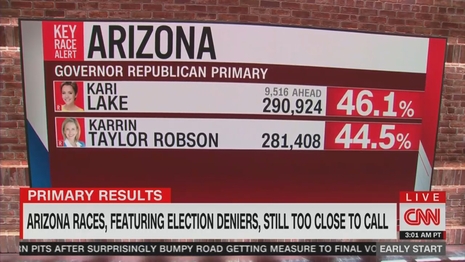 Some find "election denier" particularly offensive, since it derives from "Holocaust denier," and thus trivializes the loathsome refusal to acknowledge the genocide.

Note that the use of "election denier" by Keilar and Avlon wasn't some impromptu idea. As you'll see from the screencap, the term was included in CNN's chyron for the segment. This was malice aforethought.

So how about it, Chris Licht? Will you call Keilar and Avlon on the carpet, or will the duo, and other CNN personalities, continue to use the supposedly verboten verbiage with impunity? We'll continue to monitor the network, and report back.

On CNN's New Day, co-hosts Brianna Keilar and John Avlon using the Democrat tropes of "democracy on the ballot," "election denier" and "the big lie" was sponsored in part by Sleep Number, SelectQuote, GoDaddy, and Trivago.

BRIANNA KEILAR: It is the morning after election night in America, where democracy was one of the things on the ballot.  Primary races in five states setting the stage for what will be some of the most competitive races in November.

KEILAR: In Arizona, where election deniers are all over the ballot, Kari Lake is now leading Karrin Taylor Robson in the GOP primary for governor. Robson was endorsed by Mike Pence, while Lake was backed by Trump, and she is all in on the big lie. CNN has not called that race.