You know a Democrat candidate is in trouble when partisan Dem Jonathan Capehart spends more time raising questions about his record than trying to build him up.

Vicente Gonzalez was a guest on Capehart's MSNBC Sunday Show, and the host twice hit him with tough questions about his record.

Capehart first raised the fact that a blogger paid by Gonzalez attacked Gonzalez's opponent, the sitting Republican congresswoman in the district, Mexican-born Mayra Flores, as "Miss Frijoles," and a "cotton pickin' liar."

Gonzalez disclaimed any responsibility for the blogger's slurs. "I never said those things. My campaign or my staff never said a single one of those things. These are paid platforms, no different than when we advertise an MSNBC. We don't get to control your content."

But NBC News broke the story, and reported in its article that:

"The language first surfaced three days after Gonzalez’s campaign wrote a $1,200 check to The McHale Report blog June 24 for 'advertising services,' according to the Democrat’s Federal Election Commission finance report.

But the blog, which has called Flores 'Miss Frijoles' 21 times since then, has not published any Gonzalez ads."

In other words, Gonzalez wasn't paying for advertising—he was paying for slurs—and the blogger delivered. And as NBC also reported:

"The blog is full of posts with racist, crude and bigoted language, like the use of the N-word and derogatory references to women's private parts, including Flores’ body."

So Gonzalez knew exactly what he was paying for. 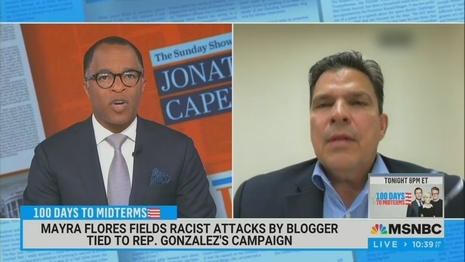 A bit later, Capehart confronted Gonzalez for having voted against the "assault weapons" ban that recently passed the House. Gonzalez claimed that he voted against it because it "didn't go far enough."

That was BS. Gonzalez was one of only five Dems, all from relatively conservative districts, to have voted against the ban. We're glad for his vote, but not for his blatant whopper, trying to explain away his vote to Capehart.

Capehart also gave credence to Flores' claim that Democrats have abandoned and taken the Hispanic community for granted. Said Capehart: "doesn't she have a case to make? I mean, she is a Member of Congress now." Ouch!

Without any prodding from Capehart, Gonzalez also made a vicious and ludicrous allegation against Flores, claiming "she voted against racial equality in marriage, interracial marriage."

And Gonzalez attacked Flores in ways that Dems would normally deplore as sexist, saying it was "sad" that she was "confused" and "gibbering."

The unimpressive Gonzalez also had a number of verbal stumbles, notably saying that: "Republicans [sic!] are the party who gave us Pell grants and student loans that educated the Latino population of South Texas, that brought us into the middle class." He surely meant to say, Democrats!

Due to redistricting, the district is now considerably more favorable to Democrats than when Flores won it by three points last month. But even if Gonzalez has that going for him, you sensed that Capehart was less than impressed by his fellow Democrat.

On his MSNBC show, Jonathan Capehart putting tough questions to Democrat congressional candidate Vicente Gonzalez about racist slurs made against his opponent by a blogger that Gonzalez had paid, and for his vote against the "assault weapons" ban, was sponsored in part by Colonial Penn.

JONATHAN CAPEHART: Political forecasters are predicting that Republicans will take over the majority, setting the scene for tough races across the country. One of the seats Republicans are hoping to hold on to is in the 34th district in Texas. Which congresswoman Mayra Flores won in a special election last month, a breakthrough for Republicans in South Texas.

Now, after recent redistricting, my next guest, another sitting Member of Congress, is challenging her for that seat. Joining me now is Congressman Vicente Gonzales, congressional candidate for Texas's 34th district. Congressman Gonzalez, thank you very much for being here. How crucial is it for Democrats to not only a hold on to their House majority, but also for you to beat congressman Flores in that race?

VICENTE GONAZALEZ: Well, it is crucial, and we're going to do it. Things are positive here in the district. We have huge support. And this area has always been a Democratic district. Unfortunately, this special election was confusing. We had less than 17, excuse me, 7% of the electoral [sic] come out. They spent $3 million, to our $150-200,000 for the candidate that knew he'd be there just for six months. So it was a complicated situation. But we are clear to take this back in November, and kick the Republicans out of South Texas.

CAPEHART: Now, your opponent's been arguing that the Democratic party has abandoned and taken the Hispanic community for granted. What's your reaction to that? I mean, doesn't she have a case to make? I mean, she is a Member of Congress now.

GONZALEZ: I think people who say those things have forgotten how they arrived to the place they are today. Republicans [sic!] are the party who gave us Pell grants and student loans that educated the Latino population of south Texas, that brought us into the middle class . . . So I think she's just confused, and it's sad that these are just talking points from the Republican party, that we have a candidate in South Texas gibbering around, that they do not reflect the values of South Texas and the people here.

CAPEHART: Now, you know, you've come under fire from fellow Democrats after a Texas blogger, previously paid by your campaign for advertising services, attacked Congresswoman Flores, calling her racist names, including "Miss Frijoles."

You condemn those remarks, but would you say to constituents who are offended by your association with someone using such derogatory language against your opponent?

GONZALEZ: Let me, let me be very clear. I never said those things. My campaign or my staff never said a single one of those things. These are paid platforms, no different than when we advertise an MSNBC. We don't get to control your content. However, we won't use you again if you make those types of comments. And it's no different here.

CAPEHART: I hear you, what you're saying, congressman, especially on Congressman Flores's votes against particular gun safety legislation. But correct me if I'm wrong: the assault weapons ban that the House just approved, just before the weekend, you voted against it! Why?

GONZALEZ: That's right. That assault weapons ban didn't go far enough, we didn't limit magazine capacities, which is how people are dying. There were guns with high magazine capacities and high caliber capacity that were not on that list. And then we had shotguns that you use for bird hunting that were.

We can't just have a fluff bill to communicate to the American people, that ultimately has zero chance of passing in the senate, and doesn't fix the problems that we have.

CAPEHART: We're going to have to leave it there. Congressman Vicente Gonzalez of Texas, thank you very much for coming to the Sunday Show.