Morning Joe Trumpets 1/6 Primetime Ratings, But Bury Biden's -- And Their Own!

There are some ratings that Morning Joe likes to trumpet -- and others they prefer to bury.

Take today's episode. The first half-hour went on—at length—about how the first night of the J6 committee hearings attracted 20 million viewers. Mika and Joe repeatedly made invidious comparisons between that viewership, and the ratings scored by Donald Trump's Apprentice shows. We counted no fewer than 14 times in the first half-hour that the r-word was used.

But then there are the ratings that Morning Joe definitely doesn't like to discuss. During Trump's time in office, every dip in his ratings became the subject of delighted discussion. But since Biden took over, his calamitous favorability ratings, such as these, have disappeared from Morning Joe's radar screen.

But since they obsess over Trump, they compared the ratings for the 1/6 hearings on ALL channels to the Trump reality shows, that only aired on NBC. 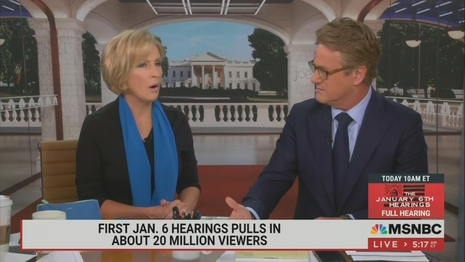 SCARBOROUGH: But I want you to compare those 20 million viewers with the biggest ratings Donald Trump garnered for his reality show.

MIKA: The finale! The buildup.

SCARBOROUGH: They had 7.6 million viewers.

MIKA: Wow! These hearings trumped that.

And then there are the ratings . . .  for Morning Joe itself. Check out this chart of the show's Nielsen ratings. As of the end of May, Morning Joe's ratings, compared to two years ago, are down a disastrous 41%. Sad! 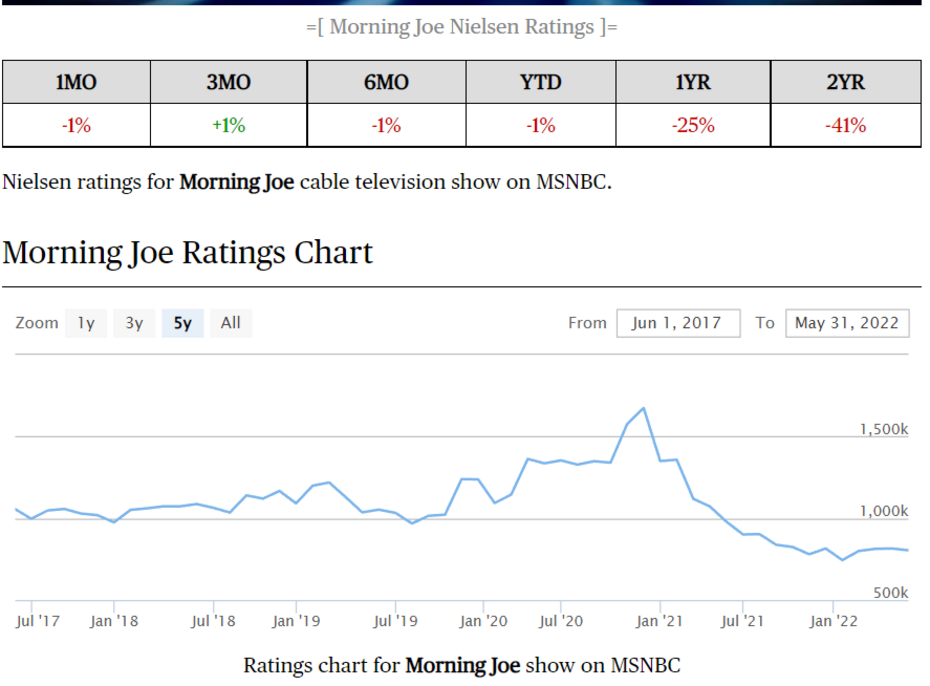 Note: Joe and Mika made repeated, sarcastic reference to the fact that Fox News, unlike the liberal-media networks, didn't carry live coverage of the J6 hearings [although Fox Business did carry the hearings.]  And, in comparing Trump's Apprentice ratings, the pair also cast the 1/6 ratings as being those of  Trump bete noire Liz Cheney, as if the hearings were all her doing. Scarborough said it "looks like Liz has him more than doubled there." Guess Joe and Mika didn't want to describe the hearings as being Nancy Pelosi's!

Morning Joe boasting about the ratings of the first night of the J6 hearings, while burying news of Biden's terrible favorability ratings, and the show's own loss of 41% of its audience over the last two years was sponsored in part by Liberty Mutual and Clear Choice.

MIKA BRZEZINSKI: The ratings from the first night of hearings.

MIKA: I mean, one major network didn't even carry it, and it got pretty high ratings.

MIKA: We'll talk about that, coming up.

SCARBOROUGH: A lot of people watched the first one. It was massive!

MIKA: Yeah. You know, a lot of people, they like to look at ratings as sort of a success meter. Some people look at it that way.

SCARBOROUGH: It's a little silly.

MIKA: Does it matter how many people watch?

SCARBOROUGH: But people obsess over ratings. But I will tell you, it is interesting that everybody was saying that the Democrats and Republicans that were on this committee had failed.

MIKA: We heard they were boring.

SCARBOROUGH: Oh, these were terrible hearings. They've already failed. Remember, we had, we read op-eds even before they had the first hearing--they were called failures.

SCARBOROUGH: Well, by the critics that weren't even watching.

MIKA: Exactly. Because there was a network that didn't carry it. And despite that -- like a major network, a powerful network.

MIKA: But based on the ratings for the first hearing, there seems to be a lot of interest.

SCARBOROUGH: A ton! Mika, do you know that about 20 million people across America --

MIKA: And I thought one of the biggest networks didn't even carry it.

SCARBOROUGH: No, they didn't. They didn't. And as the Times points out, those 20 million viewers is in the ballpark with big television events like Sunday Night Football.

SCARBOROUGH: But I want you to compare those 20 million viewers with the biggest ratings Donald Trump garnered for his reality show.

MIKA: The finale! The buildup.

SCARBOROUGH: They had 7.6 million viewers.

MIKA: Wow! These hearings trumped that.

SCARBOROUGH: I'm not really good at math, Lemire, but it seems -- and if you look at the last season of the Apprentice --

MIKA: Let me write it down.

SCARBOROUGH: The last season of the Apprentice, Donald Trump got 4.6 million. Liz Cheney got 20 million . . . You know, if trump said the Apprentice was one of the most popular shows of all time --

SCARBOROUGH: That's great. Hold on, we're still looking at these numbers. Apprentice, final season, 4.6 million, to Liz Cheney, who got 20.

MIKA: My God. You could add those up and it still wouldn't add up to the hearing.

SCARBOROUGH: Yeah, looks like Liz has him more than doubled there.

JONATHAN LEMIRE: Yeah. We need Steve Rattner to break down the math here, because we're all struggling with it. But there's no question that the ratings for that first hearing last week dwarfed anything then celebrity developer Donald Trump got for either of his itinerary of the Apprentice franchise.