CNN's Laura Jarrett has unwittingly exposed the contempt with which the liberal media views so many Americans.

On Tuesday morning's New Day, Jarrett, daughter of Obama consigliere Valerie, was asked by co-host John Berman what it says that the Dems brought in James Goldston, the former president of ABC News, to produce their January 6 committee hearings. Replied Jarrett:

"I think it shows you that they want to make this compelling. They know that a certain segment of the American public has a tin ear to this, sadly, and shouldn't, but has seen that video of them storming the Capitol so many times now, it may not have the same impact."

Yes, don't blame the Democrats for turning their hearings into a made-for-TV reality show. It's the fault of those darned, tin-eared, Americans! Why are those idiot Americans more concerned about coughing up a king's ransom for a full tank than in watching the Capitol riots for the umpteenth time?

Jeffrey Toobin complimented the Democrats on their decision to bring in a professional producer, saying the Democrats were handling things in a "more intelligent" way.

Of course, Goldston has lots of experience in producing television that is favorable to Democrat fortunes. That's how the liberal media sees its job, after all. With this gig, Goldston is simply being slightly more out front about his intentions.

And in an insight into the incestuous world of the liberal media, Berman prefaced his question with the "full disclosure" that he had worked for Goldston when the latter was the executive producer of Good Morning America and Nightline. 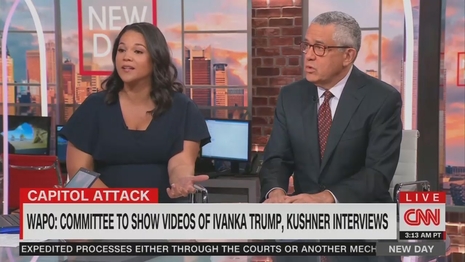 CNN's Laura Jarrett blaming the "tin ear" of Americans for the decision by Democrats to hire a TV executive to produce their January 6 committee hearings was sponsored in part by Verizon, Apple, Panera, TD Ameritrade, Amazon, and Expedia.

James Goldston, former president of ABC News, who I worked for--full disclosure--when he was EP [executive producer] of GMA and Nightline, a terrific television producer, has been brought in to help produce these hearings. What does that tell you?

LAURA JARRETT: I think it shows you that they want to make this compelling. They know that a certain segment of the American public has a tin ear to this, sadly, and shouldn't, but has seen that video of them storming the Capitol so many times now, it may not have the same impact.

So I think that they brought in essentially an expert, a showrunner, to try to package it in a way that breaks through.

JEFFREY TOOBIN: And it is worth remembering that most congressional hearings are absolutely awful to watch on
television. They are, you know, when they give each Member of Congress five minutes to ask questions, when they bloviate for five minutes and don't even ask any, questions. No wonder those don't have much of an impact.

There seems to be an acknowledgement here that we have to make a television slow, and that's why they hired a television professional. We'll see what he produces, but it seems to me, at least, that they are thinking in a more intelligent way about it.