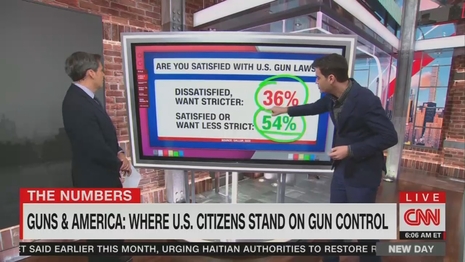 You can't tune into Morning Joe nowadays without hearing it trumpeted that somewhere between 85-90% of Americans want more gun-control laws.

But over on CNN, Wednesday morning's New Day was telling an inconvenient truth. Check out how co-host John Berman framed matters. You might normally expect him to present things from a strongly pro-gun control perspective, but this is how he teed up Enten:

"One thing you hear is that around 90% of Americans support background checks, but does that tell the whole story about how much agreement there really is? . . . Maybe not exactly what you think."

They pointed to a Gallup poll showing that a majority of Americans are either satisfied with the current level of gun control—or actually want less gun control!

Enten also cited two recent state referendums on background checks. He noted that in Maine, the proposal to expand background checks was actually defeated, and in Nevada, passed with the slimmest of margins, at barely over 50%.

"So you look at those polls that say background check: 80%, 90%! When you look at people actually voting on the measure, it's not anywhere close to that! It's much more of a 50/50 proposition."

Meanwhile, back at Morning Joe, it's more gun control, all the time.

This NewsBuster is a regular New Day viewer, and for some time now has noted inklings of a move away from the hard-left line it had taken for years. The Chris Licht [CNN's new head honcho] effect? But MSNBC seems committed to toeing the liberal line -- to the bitter end?

PS: Enten showed up later in the morning to underline how poorly Biden is polling on the economy.

On CNN's New Day, polling expert Harry Enten presenting data showing that a majority of Americans are either satisfied with the current level of gun-control legislation, or actually want less restrictive laws, was sponsored in part by Orkin, GlaxoSmithKline, maker of Voltaren, Lincoln, IHOP, and Whole Foods,

JOHN BERMAN: So congressional staffers will continue bipartisan talks on gun safety today. One thing you hear is that around 90% of Americans support background checks, but does that tell the whole story about how much agreement there really is?

Joining me now is Harry Enten, CNN's senior data reporter. Harry, when we talk about possible areas of agreement, maybe not exactly what you think.

HARRY ENTEN: Yeah, you know, to me the bigger question is, you know, it's not just how do Americans feel about gun control, but how powerfully do they feel about it?

This to me tells the story. Because it could be that you want stricter gun laws, but you're generally, actually, satisfied, and this 54% gives it away. Most Americans are either satisfied, or they actually want less strict gun laws.

BERMAN: That is really interesting: so, the majority here doesn't seem to want more safety measures in place and, again, on background checks, the polling says a lot of people think they're a good idea, but when you actually put it to a test on the ballot, Harry --

ENTEN: You know, what I love is when you actually look and say, okay, do these polls actually follow where the voters are when they get a chance to vote on it?

And back in 2016, there were two ballot measures to expand background checks. One was in Maine, one was in Nevada. Remember: both of these states are right in the middle of the national electorate, right? They're both within a point of the national presidential. Look what happened in Maine. Yes only got 48.2%. The ballot measure actually failed to extend background checks. The majority, 52%, said no. In Nevada, it barely passed just a little more than 50% of the vote.

So you look at those polls that say background check: 80%, 90%! When you look at people actually voting on the measure, it's not anywhere close to that! It's much more of a 50/50 proposition.