Who died and made Joe Scarborough Pope?

You'd think Joe Scarborough—who frequently touts his Baptist roots—would be cautious when it comes to criticizing another religion. But on today's Morning Joe, Scarborough jumped in with both feet in slamming the Roman Catholic church over the excommunication by the archbishop of San Francisco of pro-abortion Nancy Pelosi. He said after the exposure of child sex abuse, "They should thank God that Nancy Pelosi has remained a Catholic through their torrent of the most grotesque sins imaginable."

First, Mika Brzezinski proclaimed "the San Francisco archdiocese has banned Nancy Pelosi—who we're having on the show tomorrow—Speaker of the House, from receiving Communion. She's a staunch Catholic. But because of her stance on abortion, they've banned her."

Fact check: Denying someone communion is not a "ban" from the church. She wouldn't be thrown out by security if she showed up. The Archbishop is trying to instruct her that she should not be promoting abortion -- as in the recent House bill trying to remove all restrictions on abortions in all 50 states -- and then presenting herself as a "devout Catholic." Mika shouldn't be calling her "staunch." 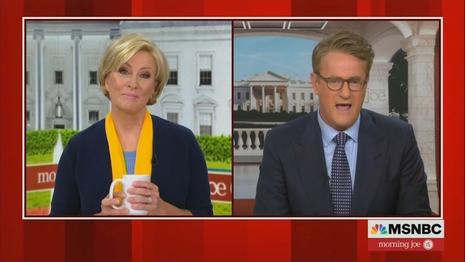 But according to Scarborough, the fact of the child-abuse scandals within the Church somehow dictates that it should abandon one of it core precepts: the respect for human life at all stages. Will Scarborough therefore also insist that the Church drop its objection to the death penalty?  Or is Scarborough only interested in having the Church end its opposition to Democrat dogma?

Joe Scarborough blasting the excommunication from the Roman Catholic church of pro-abortion Nancy Pelosi was sponsored in part by Golden Corral, Priceline, and USPS.

MIKA BRZEZINSKI: An addendum to the Roe v. Wade story, this past weekend, the San Francisco archdiocese has banned Nancy Pelosi—who we're having on the show tomorrow—Speaker of the House, from receiving Communion. She's a staunch Catholic. But because of her stance on abortion, they've banned her. We'll be asking her about that. But this is --

MIKA: -- this is where we're going with all of this. A lot of opportunities for the Democrats but a lot of challenges.

SCARBOROUGH: Who actually stayed with it through a crisis where priests abused --

SCARBOROUGH: -- thousands and thousands of children, and passed children around from one church to another church, from one diocese to another diocese. It went all the way up to the top. And they are being self-righteous and telling Nancy Pelosi that she can't take Communion?

They should thank God that Nancy Pelosi has remained a Catholic through their torrent of, of the most grotesque sins imaginable.