Scarborough: Not Saying Biden Should Take Ukraine 'Victory Lap,' But... 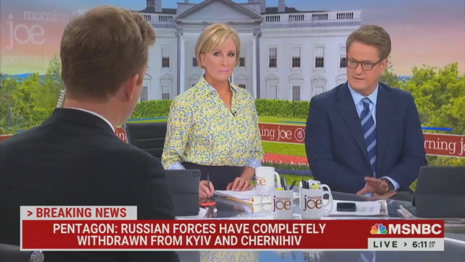 The Pentagon announced Russian forces have left the Ukrainian capital of Kyiv, which is good news. So naturally, the Morning Joe crew wanted a "victory lap" for President Biden. Only they didn't want to say that up front.

Scarborough said he knew war was still going on, but this withdrawal is a big deal: "I think the Pentagon official is right, it is a victory for the ages."

After noting the bravery of the Ukrainians, Joe Scarborough wanted to lecture Biden's critics: "Let's also just be really blunt here. A lot of criticism focused towards this president, focused towards this administration, focused towards NATO, for not doing enough. What's happened in Ukraine would have never happened if we had not been flooding the zone with US weapons, with NATO weapons, with Russian -- old Russian weapons that former Warsaw countries had. That's just the reality of it. Nobody's going to stop and say that now."

Biden could take a victory lap, but he won't, said Joe:

SCARBOROUGH: I understand this is how democracies work, and this is why we're vibrant. Nobody stops like for a victory lap. We're always asking, what can you do next? What -- and let's ask that question. How do we help the Ukrainians even more?

But this remarkable, historic, retreat would have never happened without the support of NATO countries. And I think everybody, from the Baltic states, through Germany, through France, England, the United States, everybody, should be thanked for what they've done and now let's prepare for the next phase.

Sure, Scarborough was careful to include NATO allies as among those also deserving credit. But for purposes of domestic political consumption, Scarborough's comments amounted to the victory lap that Biden can't take for himself.

Scarborough gave away his game by starting his spiel by describing the criticism that Biden has taken over Ukraine. So the rest of his statement amounted to a defense, and a glorification, of Biden. And Scarborough seemed to express regret, if understanding, for the inability to take that victory lap—even though he thought it would be justified.

On Morning Joe, Joe Scarborough taking a virtual victory lap for Biden over Ukraine was sponsored in part by Allstate and Kayak.