CNN's John Harwood could be the biggest pro-Biden hack in the liberal media. Appearing on New Day, Harwood dismissed the significance of the Justice Department's investigation of Hunter Biden.

What Harwood conveniently ignored was, as co-host Brianna Keilar mentioned at the top of the segment, that "the president is not being investigated as a result of his son's dealings."

Isn't that convenient? Gonna be hard for the Justice Department to find that nexus, John, if they're not even looking for it!

And as for Harwood's claim of "zero evidence" of Joe Biden's involvement, consider these points: 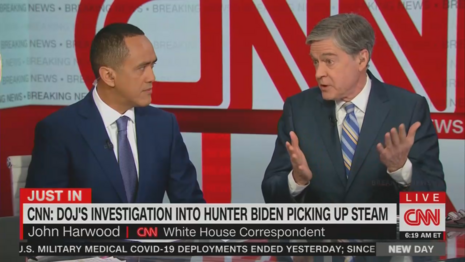 So yes: there's "zero evidence"—that John Harwood is anything other than a shameless Biden hack and sycophant.

Note that co-host Brianna Keilar was quick to agree, saying that Harwood's attempt to distance Joe Biden from Hunter was an "important distinction."

Also in the segment was CNN justice correspondent Evan Perez, who said that "the right wing, has featured a lot of stories" about Hunter Biden's laptop. True: because until very recently, the left has claimed that the Hunter Biden laptop was fake news, and buried the story.

On CNN's New Day, pro-Biden hack John Harwood striving to downplay the significance of the investigation of Hunter Biden was sponsored in part by DirecTV and Clear Choice.

BRIANNA KEILAR: Brand-new CNN reporting this morning: a Justice Department investigation on Hunter Biden, the president's son, has intensified over the last several months. This probe began as early as 2018, and concerns that Hunter Biden's business dealings in foreign countries like Ukraine here are really the topic of concern while his father was serving as Vice President. Sources telling CNN that President Biden is not being investigated in connection to his son's dealings.

EVAN PEREZ: So, there's a lot of issues that the Justice Department is looking into, including, of course, this laptop that, on the right wing, has featured a lot of stories about Hunter Biden. We know the FBI has possession of it, and that they believe it is his laptop, that the contents of it are his. The question of whether this is relevant to the investigation, we don't know.

KEILAR: How significant is this, John?

JOHN HARWOOD: Well, look, it seems pretty clear that Hunter Biden was trading on his father's name to make a lot of money. He's had a difficult life.

But until you make, someone makes a nexus between what Hunter Biden has done, and official activities of Vice President Biden or President Biden, it's a not pretty picture, but it's really of much public import in terms of the policy of the United States, or the administration of the government. And the fact that an investigation has been sustained during the Biden administration is an indication that the government is working on this subject. And we'll see what the results are.