If you want to say that Biden SCOTUS nominee Ketanji Brown Jackson has a solid resume, go ahead. But to make that case by belittling the credentials of Brett Kavanaugh and Amy Coney Barrett is shall we say, Pants On Fire.

Appearing on The Sunday Show with Jonathan Capehart on MSNBC, Fordham law professor Christina Greer committed a huge self-own with this ludicrous allegation:

"We're seeing so many senators trying to justify their own racism and sexism when they seamlessly voted for Brett Kavanaugh, and Amy Coney Barrett, where we can look at their CVs, and they are abysmal and embarrassing to a certain extent about why they should be on the Supreme Court."

Capehart cacked like Kamala when Greer claimed Jackson's resume was as long as a "CVS receipt" (the drugstore's customers often get about a yardstick of coupons). Let's have a look at Kavanaugh and Coney Barrett's allegedly "abysmal and embarrassing" qualifications, shall we?

You know what was "abysmal and embarrassing?" Greer's failed attempt to disparage Kavanaugh and Coney Barrett's credentials. Greer is such a partisan that after Kavanaugh was confirmed, she ranted "he exhibited a temperament not befitting a sales clerk at your local mall"...in response to being accused of raping women as a teenager. 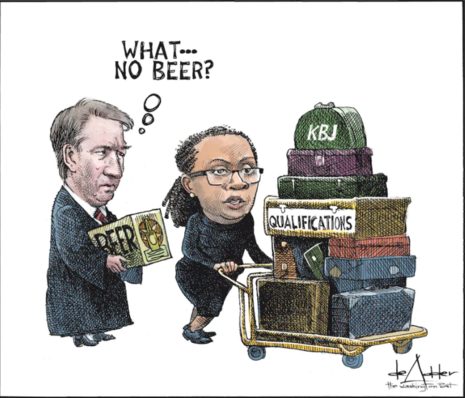 Capehart piled on, pointing to a Washington Post cartoon mockingly implying that Kavanaugh's qualifications could be represented by a case of beer, compared to a overloaded cart of Brown Jackson's credentials.

Then, displaying an utter unawareness of the hypocrisy and irony of their allegations, the panel went on to castigate Republicans for criticizing Democrat SCOTUS nominees.

Amna Nawaz, a PBS NewsHour correspondent who doubles as an MSNBC contributor, said there is a "kind of reflexive Republican pushback to anything this president does right now," as if Democrats never acted this way.

Surely the panel was aware that the verb "to Bork" was coined to describe a savage attack on a Supreme Court nominee, after Democrats in 1987 destroyed the candidacy of Robert Bork, President Reagan's supremely qualified nominee. And who was the chair of the Senate Judiciary Committee leading the attack? Then-Senator Joe Biden.

Democrats, with Biden leading the charge, were back at it in 1991, with a vicious assault against the 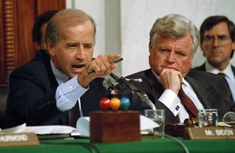 nomination of Clarence Thomas. MSNBC wants to talk about "performative" attacks playing to the base? The best illustration thereof could be the iconic photo of Biden jabbing an accusatory finger at Thomas. Ted Kennedy, seen looking on, launched a vicious attack of his own on Bork.

Most recently, there was the contemptible Democrat attack on the nomination of Brett Kavanaugh's, in which Democrats, playing to their base, dredged up unproven allegations of teenaged rape (even gang rape) against him.

So please, MSNBC and the liberal media at large, spare us the faux outrage in pre-emptively accusing Republicans of unfair criticism of Brown Jackson, and take a good look in the mirror at the Democrats' history of scurrilous attacks on Republican nominees.

On Jonathan Capehart's MSNBC show, panelists claiming Brett Kavanaugh and Amy Coney Barrett's qualifications to serve on the Supreme Court were "abysmal and embarrassing" was sponsored in part by AT&T.

CHRISTINA GREER: All of a sudden, these same men who either have the same degrees, or have seamlessly voted for people with the same degrees, now see it a problem where she's too elite or too out of touch. Where we know she was a public defender, the first since Thurgood Marshall.

I mean, her qualifications are longer than a CVS receipt [Capehart heard laughing off-screen.] But we're seeing so many senators trying to justify their own racism and sexism when they seamlessly voted for Brett Kavanaugh, and Amy Coney Barrett, where we can look at their CVs, and they are abysmal and embarrassing to a certain extent about why they should be on the Supreme Court.

JONATHAN CAPEHART: Christina, I burst out laughing over your CVS receipt comment because it's threw. Her qualifications are huge. And, two, on the Washington Post editorial page today, the cartoon that we have there today shows exactly what you're talking about with Judge Jackson pushing all of her qualifications on that trolley, with Justice Kavanaugh behind her saying, what, no beer?

TIM MILLER: I think what you're seeing right now is in the Trump era, there is this demand of Republicans, of Republican politicians to put on this performative, trolly, cruel fight because they think that's what worked for Donald Trump. They think that's what attracted Republican voters to Donald Trump. In a lot of cases they're right about that. And so, I think they feel like if they just move this confirmation through without, you know, putting on the performative fight, then there would be backlash among the voters.

CAPEHART: Not likely that Republicans, even if they hurl racism, sexism, misogyny at her into the process, that they can scuttle her nomination, is there?

AMNA NAWAZ: Well, look, I think if history is a guide, there's a couple of things we should point to, right? Which is despite the comments that you've seen from a number of Republicans so far, which, to Tim's point, really does seem like kind of reflexive Republican pushback to anything this president does right now, largely as a messaging tool.