This is beyond Trump Derangement Syndrome. This is Conspiracy Theory Gone Wild.

As she put it:

"Trump was installed as the President of the United States in order to weaken the alliances that were preventing Putin from achieving his goals, alliances like NATO."

"Installed??" Sounds like Sarah's seen The Manchurian Candidate a few times too many!

Similarly, Kendzior twice described Trump as having been "put in" to office. Naturally, she never named names, nor described exactly how the insidious plot was accomplished.

Liberals love to condemn Republicans who question the validity of the 2020 election. But here, a leftist is suggesting something altogether more alarming: that unnamed outside forces somehow "installed" and "put in" Trump as their pawn, in order to permit Putin to achieve his nefarious ends. That is truly unhinged!

Cross, seemingly concurred with Kendzior's wild theories, ending the segment by saying, "indeed they are." 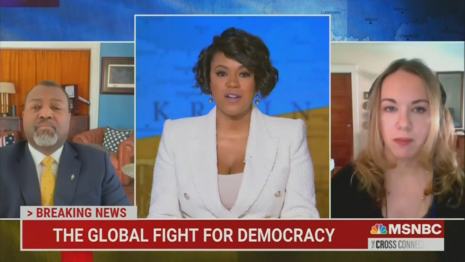 On Tiffany Cross's MSNBC show, regular guest Sarah Kendzior floating the bizarre theory that Trump was "installed" as president in order to undermine alliances like NATO preventing Putin from achieving his goals was sponsored in part by Verizon.

TIFFANY CROSS: With right-wing extremists having an entire network to espouse these kind of extremist beliefs and supporting, essentially, an enemy of the United States, what does that mean for us? Because there are -- it's not that they're saying these things, it's that the huge audience they have that consumes these things.

SARAH KENDZIOR: Yeah, it is the endurance of the audience, the fact they have been doing this for such, you know, for such a long time.

Trump was put in as a bulldozer. And he was also put in, as Malcolm [Nance] said, as a bulldozer to the Constitution, to our  system of checks and balances, to our system of institutional trust. And the unwillingness of people in the United States to confront the brokenness of those institutions -- whether through financil corruption in recent years, or age old systemic problems like the endemic racism that holds our country up, has contributed to that. And Fox News, in this sense, is just an extension of the long-running, destructive pattern.

CROSS: Indeed they are.