Since LBJ created the so-called War on Poverty, the countless trillions spent on an endless array of government programs have not merely failed to improve the societal ills they were supposedly designed to address. By most measures, they have made them worse.

But liberals never learn. Their solution to societal problems continues to be to spend—or to use their euphemism, "invest"—yet more money—or to use another of their euphemisms, "resources." And thus it was that on his MSNBC show this morning, Jonathan Capehart gave Democrat Chicago Mayor Lori Lightfoot a platform to talk about her latest spending spree ostensibly intended to solve the city's crime wave. As Lightfoot put it: "We can't just arrest our way out of the crime problem, we have to invest our way out of this problem."

Sounding like a true MSNBC liberal, Capehart, offered this softball: "So, Madam Mayor, how can cities address violent crime without resorting to the failed policies of the past?" That would presumably be a reference to the bad-old-days of Mayors Rudy Giuliani and Michael Bloomberg, when they, you know, actually did reduce crime in New York City! Ironically, Capehart was a speechwriter for Bloomberg in his 2001 mayoral campaign. But Capehart has since thrown in his lot with the far left.

Capehart introduced his guest by saying that in recent months, Lightfoot "has directed millions of dollars to the community safety coordination center."  Lightfoot proceeded to brag that "in Chicago, we have transformational levels of resources." She indicated that the money would be spent "in coordination with our community partners." 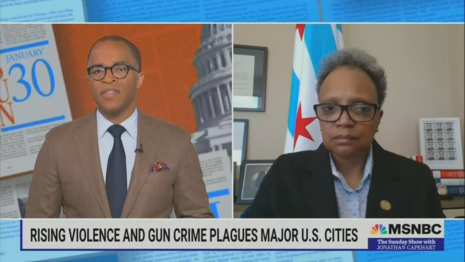 Let's see. A Chicago mayor has gotten hold of a "transformational" pile of money. And she'll be distributing it in part to "community partners" in connection with a new "community center" that is a "whole-of-government" response. Absolutely no potential for Chicago-way boondoggles there!

In addition to claiming that "we have to invest our way" out of crime, Lightfoot employed a precious bit of libspeak. She described the adult criminals committing the violence as being "under-resourced"

Look for a defendant sometime soon, quoting Lightfoot in court:  "You can't blame me for that Vuitton smash-and-grab, Your Honor. I was 'under-resourced: just ask the Mayor!"

Note: Capehart didn't challenge Lightfoot on her plan to spend millions on a new government program.

On Jonathan Capehart's MSNBC show, Chicago Mayor Lori Lightfoot saying "we have to invest our way" out of the crime problem was sponsored in part by Subway and ASPCA.

CAPEHART: So, Madam Mayor, how can cities address violent crime without resorting to the failed policies of the past?

What we know historically, is that when there's been a spike in violence, almost the primary and only response has been to throw more law-enforcement resources at the problem. It may temporarily bring down the spike in crime, but it doesn't do anything for the long-term root causes of the violence.

Now look, in the short term we have to make sure that our police department is holding violent, dangerous people accountable, and that we're working with our county prosecutors and the court system to make sure that when we make arrests, we put together good cases, those individuals feel the weight of responsibility and accountability.

But in the long term, we know that we can't just arrest our way out of this problem. We have to invest our way out of this problem. When we see statistics like in my city where the vast majority of victims and perpetrators of violent crime are 18 years or older, that then causes us to do a mind shift about where we're investing resources. We've got to continue to support our youth, but we also know that these adults, these unemployed, under-resourced adults, are the ones that are driving the violence.

So we've put together something called the community safety coordination center, which is our whole-of-government approach. Meaning we're bringing every aspect of city government that has any role, any impact on community violence, together literally in the same physical space, so that we know cross these various work streams, what's happening in particular areas. We're using data-driven strategies and we're doing that in coordination with our community partners. And we're already seeing meaningful progress in the way in which we respond to crime, the way in which we're resourcing communities. This is the approach that's going to invest us out of this long-term problem, not just here in Chicago, but I believe across the country.