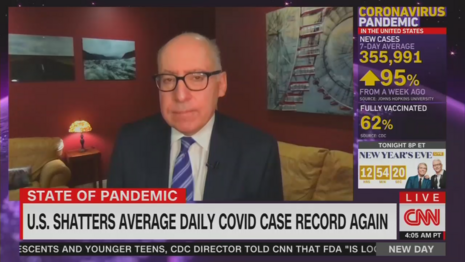 This was CNN cognitive dissonance on steroids -- with a booster shot of hypocrisy.

Picture this. In its 7 am hour, New Day brought on CNN medical analyst  Dr. Jonathan Reiner who called the Times Square New Year's Eve celebration a potential "superspreader" event that is "completely unnecessary" and "unwise." Reiner called omicron "the most contagious pathogen that any of us have ever seen," estimating the true number of daily infections at one million.

Co-host John Avlon said the description of omicron as " the most contagious pathogen" was "sobering." And he and co-host Kaitlan Collins each reacted with "wow" to the doc's estimate of one million daily infections.

But the very next hour of New Day contained a long, hyper-excited, promo for . . . CNN's Times Square New Year's Eve special! CNN entertainment correspondent Chloe Melas couldn't control her exuberance as she touted the event, with all its celebrity guests, hosted by Anderson Cooper and Andy Cohen. And Avlon and Collins joined in the giddy enthusiasm.

Melas gushed "I'm telling you, the night is going to be jaw-dropping, surprise after surprise. And, of course, Andy and Anderson, they're going to like spill some tea, have some drinks. It's going to be fun!" 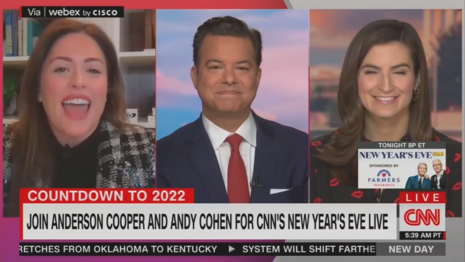 So yes, come one, come all, either in person or via TV, to the completely unnecessary superspreader event where thousands of revelers will be adding to the million-a-day count of infections! Watch all the fun starting live at 8 PM on CNN!

Compare and contrast the screencaps of the CNN doc's grim visage at the prospect of the Times Square superspreader event, with the giddy face of the CNN entertainment reporter touting the network Times Square special.

CNN giddily promoting its Times Square New Year's Eve event, despite having heard from a CNN doctor who called the event a potential "superspreader" that was "completely unnecessary" was sponsored in part by Farmers Insurance, VRBO, and Consumer Cellular.

KAITLAN COLLINS [7 am hour]: Joining us now is Dr. Jonathan Reiner, CNN medical analyst and professor of medicine and surgery at George Washington University. Dr. Reiner, you just heard Polo there talking about what tonight's [Times Square New Year's Eve celebration] is going to look like. What is your view of that?

JONATHAN REINER: Potential superspreader event, and completely unnecessary. I sort of feel like we've hit the iceberg, and there are a lot of people who just want the band to keep playing.

It just seems having a mass party when we're facing the most contagious pathogen that any of us have ever seen, seems unwise.

JOHN AVLON: The most contagious pathogen any of us have seen. That is a sobering statement.

REINER: Yeah. Yesterday, the United States recorded 600,000 cases. That's just the tip of the iceberg, to continue with my Titanic metaphor. Because so many people now are being tested at home, and none of those tests are basically being reported. So I think you can confidently say a million people a day are contracting this virus.

COLLINS: Wow! A million a day is where you think the number really is.

COLLINS: A live look at Times Square right now as we are preparing to say good-bye to 2021 and ring in 2022 with our special live coverage, kicking off tonight at 8:00 PM Eastern. Anderson Cooper and Andy Cohen will return to co-host CNN's New Year's Eve Live. So joining us now to tell us what to expect tonight is our Times Square correspondent for the celebration, Chloe Melas. So Chloe, what is it going to look like there tonight?

CHLOE MELAS: Oh, my goodness! Hey! I am so excited, we are just hours away from Times Square, allowing crowds into, you know, their spots. A slew of celebrities, so you are going to want to watch tonight. We have Katy Perry! And we have so many other celebrities: David Arquette, Patti Labelle, Duran Duran, Earth, Wind Fire. The list goes on and on. And some surprise guests too, that I don't want to give away just yet.

MELAS: I'm telling you, the night is going to be jaw-dropping, surprise after surprise. And, of course, Andy and Anderson, they're going to like spill some tea, have some drinks. It's going to be fun!

AVLON: All right, Chloe. I need. Thank you so much. Ball dropping, jaw dropping in Times Square. Be well, Happy New Year. Join Anderson and Andy for CNN's New Year's Eve live! The party starts tonight at 8:00, here on CNN.