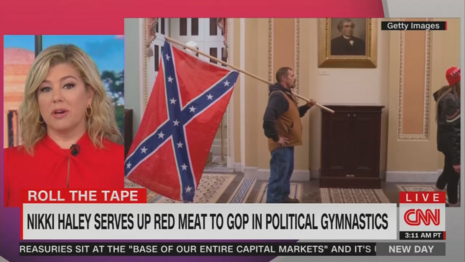 Ron DeSantis has come in for plenty of criticism at CNN's New Day. But none of it has exhibited the visceral disdain that the show has heaped on another potential 2024 Republican contender—Nikki Haley.

As we noted here and here, New Day's basic beef with Haley is that she is a "flip-flopper," a "weathervane," twisting with the political winds. New Day broke out a new epithet for Haley this morning, branding her a "pinball machine."

"Nikki Haley: former governor, former ambassador to the United Nations. Current political gymnast. More flips, and twists, and contortions than an Olympic floor routine. Hear what she said about the former president now."

New Day was keying off Haley's remarks yesterday at the Ronald Reagan library, in which she said that the hatred that many Americans have for our country is "a pandemic much more damaging than any virus." Her speech has been seen by some as laying the groundwork for a 2024 presidential run.

Co-host Brianna Keilar attempted to trash Haley in a variety of ways.

When Keilar completed her seemingly canned anti-Haley spiel, she brought in former Trump aide Miles Taylor to echo her criticism.

Taylor's the guy who, as "Anonymous," penned a New York Times op-ed boasting of being part of "the resistance" inside the Trump administration. At publication time, the Times billed him as a "senior official in the Trump administration." That would imply a cabinet secretary or similarly high-ranking official. But turns out he was no more than a mid-level aide, as chief of staff at DHS.

Taylor dutifully played the parrot, accusing Haley of "political gymnastics" and "tying [herself] in knots." And Taylor employed an insulting metaphor against a female politician, describing Haley as "prostrating herself at the feet of Donald Trump."

It's true that when it comes to President Trump, Haley has changed her tone more than once. But that doesn't explain CNN's repeated, sneering, attacks on her. So what is it about Haley that arouses CNN's unusual ire?  As we conjectured back in April, could it be:

"A sense that Haley might pose the biggest electoral threat to President Biden—or, as the case may be—to Kamala Harris, who shares Indian-American heritage with Haley?"

CNN's renewed attack on Nikki Haley was sponsored in part by Fidelity and Liberty Mutual.

BRIANNA KEILAR: Last night, Nikki Haley, once a rising star in the GOP, now more like a Republican pinball machine, said this at the Ronald Reagan Library.

NIKKI HALEY: A large portion of our people are plagued by self-doubt or even by hatred of America. It's a pandemic much more damaging than any virus.

KEILAR: The former ambassador to the U.N. not letting more than 700,000 COVID deaths and counting get in the way of minimizing a pandemic politicized by the administration she served, as she suggests liberals hate America, and the country doesn't have a racism problem.

Worth noting while Dylann Roof was convicted on federal hate crime charges, he did not face state hate crime charges because South Carolina didn't have a hate crimes law, and it still doesn't . . . But in last night's speech, the former governor, who removed the Confederate flag from the South Carolina statehouse grounds, only to have that symbol brandished inside the U.S. Capitol by rioters this past January, whitewashed the ups and downs of the American experience with racism and the challenges still ahead, all apparently to appeal to the conservative base.

Shortly after that, Haley softened her criticism. She even tried to go to Mar-a-Lago to kiss the ring, but was reportedly denied. Now she may be right, that history will judge Donald Trump harshly, but Nikki Haley will not. Because she's too busy trying to ride his coattails.

MILES TAYLOR: You guys used the operative word today, and that's political gymnastics. And that's what Nikki Haley is doing. She is putting herself, frankly, though, in an impossible position. Because while posturing for the presidency, she's also prostrating herself at the feet of Donald Trump.

A recent poll that we looked at, at my organization, Renew America Movement, shows that Donald Trump's numbers among Republicans have dropped from around 50% to 25%. He's now about even with Ron DeSantis in who they want to see as the head of the party. And for the first time ever in his tenure, a majority of Republicans are now saying they want a fresh face. So the Nikki Haleys of the world see blood in the water. They're just, they're having to twist themselves in knots to show that they're the right ones to take over for him. Because when he was in power, they refused to stand up to the guy.