On CNN's State of the Union today, host Jake Tapper got off quite the zinger to end his interview with DHS Secretary Alejandro Mayorkas.

Mayorkas had lavished praise on the Border Patrol, describing their "heroism," and saying he has been "incredibly proud to work alongside them."

To which Tapper responded, "The nice words you said about them, you should probably share with President Biden, not just with me today."

The exchange came in the context of allegations some have made against Border Patrol agents of having "whipped" Haitian immigrants at the southern border. Biden has vowed that the agents involved "will pay," and that there will be "consequences." Mayorkas himself parroted Biden, saying the images "horrified us."

But as Tapper pointed out, "some of the initial descriptions of those images were just patently false."

Tapper expressed skepticism as to the likelihood of a fair investigation, given the loaded remarks by Biden. Tapper wondered whether the investigation would be based on the facts, or on "Twitter outrage."  Mayorkas responded with this statement, which would be hilarious if it weren't so outrageous: "I think it’s quite clear that what the images suggest horrified the American public. That is quite different than learning what actually happened." 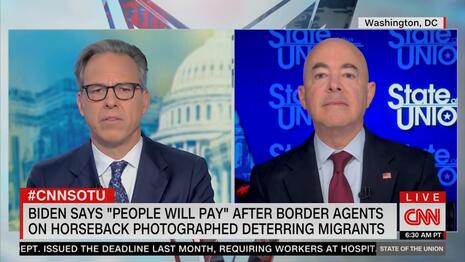 So Mayorkas essentially says, yeah, there could be a big difference between what Biden and I said, and the truth! We might have jumped to conclusions and falsely accused the Border Patrol!

Mayorkas's praise for the Border Patrol is a day late and a dollar short. And as Tapper suggested, don't tell it to a TV host—tell it to Biden, who put his thumb on the scales of justice by vowing to make the agents "pay!"

Note: as our Tim Graham has documented, liberal "fact checkers" have failed to debunk the false claims that Border Patrol agents used whips on Haitian immigrants at the border.

Jake Tapper telling DHS Secretary Alejandro Mayorkas to share his praise of the Border Patrol with President Biden, who has vowed to make Border Patrol agents "pay" for allegedly whipping Haitians at the border, was sponsored in part by Home Depot, VRBO, ServPro, and Walmart.

MAYORKAS: I will not pre-judge the facts. I do not in any way want to impair the integrity of the investigative process.

TAPPER: But, Mr. Secretary, you also said that the images “horrified us.” How can DHS claim to have an independent investigation into these border patrol agents when the president says “those people will pay” and you say the images horrified us?

MAYORKAS: Jake, I think it’s quite clear that what the images suggest horrified the American public. That is quite different than learning what actually happened, determining the facts, and the fact determinations will be made in an independent investigation by the Office for Professional Responsibility . . . What those images suggest, what they appeared to portray, was horrifying, and that I think deserves attention. That is quite different than fact determinations

TAPPER: That’s the thing. Some of the initial descriptions of those images were just patently false. There’s now video out there that provides more context. Having seen the video, are you certain that there was actually wrongdoing?

MAYORKAS: I am going to let those investigators make that determination.

TAPPER: Can the Border Patrol count on you and President Biden, who has said the people will pay, to come to a determination based on the facts and not based on Twitter outrage?

MAYORKAS: They sure can, and let me say something about that, Jake. Because I worked very closely with the men and women of U.S. Customs and Border Protection for many years. Many, many years, and they are heroic, what they do. And I saw their heroism displayed in Del Rio, Texas, last Monday, when I was there on the ground. And that is emblematic of who they are, their commitment to this country, their talent, and tireless dedication to mission. I’m incredibly proud to work alongside them.

TAPPER: Well as you know, a lot of those agents on horseback, they’re on horse because there are no roads in so many parts of the border, and a lot of them have saved the lives of migrants trying to cross the river.

The nice words you said about them, you should probably share with President Biden, not just with, not just with me today. Thank you so much for your time today, Secretary Mayorkas.