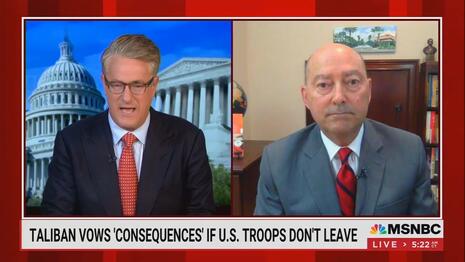 Joe "America is Back" Biden will forever be remembered for his disastrous withdrawal from Afghanistan. But the disgraced and disgraceful president can count on support from at least some dead-enders in the liberal media.

Count Joe Scarborough among them.

On Wednesday's Morning Joe, Scarborough expressed support for Biden's decision not to extend the August 31st deadline for evacuating American citizens and Afghan allies from Afghanistan. In doing so, he tacitly acknowledged that not only Afghan allies, but Americans, will be left behind, saying he wants to get out every American "that we can get out."

Scarborough's justification for ending the evacuation effort is his fear that ISIS, along with the more radical Taliban elements, will attack US troops were we to stay past August 31st.

So that's it: forget the American tradition of leaving no one behind. Exit Afghanistan, tail between legs, intimidated by terrorists. Pathetic.

Scarborough expressed his fears to retired Navy Admiral James Stavridis and Council on Foreign Relations head Richard Haass, essentially begging them to back his support of the August 31st deadline. They both gave equivocal statements in response.

But Stavridis first acknowledged Scarborough sounded like Team Biden: "I think you have walked through the exact calculus that's going on in the Pentagon and the White House." Let's guess he's recirculating administration talking points he received in his e-mail.

As we noted yesterday, there is good reason to believe that Americans will indeed be left behind if the August 31st deadline is not extended. And as Republican Rep. Michael McCaul indicated yesterday, even Biden's own Secretaries of State and Defense told him that it would not be humanly possible to get all Americans out by August 31st.

Trying to salvage some pride, Scarborough repeatedly waved the fig leaf that he had originally favored leaving 2,500 US troops in Afghanistan.

Whatever. Now that the chips are down, Scarborough shows his true colors. Defend Biden at all costs.

Joe Scarborough supporting—out of fear of ISIS attacks—President Biden's decision not to extend the August 31st deadline for evacuating US citizens and Afghan allies from Afghanistan was sponsored in part by USAA, Amazon, and BMW.

JOE SCARBOROUGH: I, I, of course, was very critical of us removing 2,500 troops from the ground, agreed that we needed to get the air base, send in more troops. And this evacuation, we’re at 70,000. I mean, it's, it is one of the most extraordinary airlifts, I think, since Berlin.

But it seems to me if we stayed past the end of the month, we would just be inviting an attack by ISIS, inviting an attack by, let’s say, an even more radical element of the Taliban. This is the sort of thing I would not want our troops sitting there indefinitely in this sort of situation.

This is obviously, this [Biden's decision not to leave 2,500 troops in Afghanistan] is something you and I opposed strongly. Here we are, though. We are where we are. We have, again, 70,000 people already air-lifted out. We have until the end of the month. I suspect the number will get close to 100,000.