CNN Pundit Admits NYC Elections Board 'Corrupt,' But It's a 'Uniquely' NYC Problem

The liberal media's refrain is that there was no significant fraud in the 2020 election. Anyone who says otherwise is condemned for propagating the "Big Lie."

So alarm bells go off for the MSM when prominent CNN analyst John Avlon called the Board of Elections in NYC, the nation's biggest city, "corrupt" and "incompetent." That happened on this morning's New Day during a discussion of how the NYC BOE's screwups have thrown the mayoral race there into chaos. And Avlon's allegation of BOE corruption wasn't the mere speculation of an outsider: Avlon used to work for the NYC BOE and the voter advisory committee!

Substitute host Erica Hill apparently sensed the danger for Democrats. If totally Democrat-controlled NYC has a corrupt and incompetent BOE, what of the BOEs in other Democrat-dominated cities, like Atlanta, Detroit, Philadelphia, etc? So it was vital for Hill to squelch such speculation. She suggested to Avlon:

"So it's a uniquely New York City problem."

Avlon played the dutiful liberal-media soldier: "it is."

Right. Because big, Democrat-controlled cities are known to be absolute paragons of integrity! 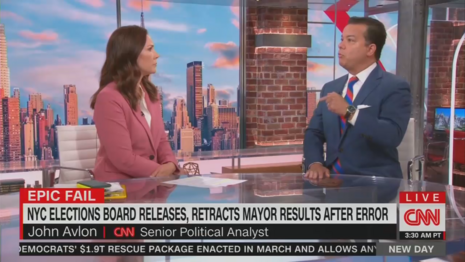 On what basis did Hill suggest, and Avlon agree, that the problem of a corrupt board of election is unique to New York? Have they delved into the inner workings of BOEs across the country? If not, how can their claim be seen as anything other than an attempt to limit the damage on behalf of Democrats?

And questions for Avlon: if this Board is so corrupt, did you blow the whistle on the corruption when you worked for it? And if, as you say, it's a "patronage organization," a vestige of NYC's bad, old Tammany Hall Democrat-machine days,  was it corrupt when Mayor Bloomberg appointed you in 2011?

Avlon ended with a boom: "Look, if the New York City Board of Elections had been in the Deep South, this thing would have been the subject of a DOJ takeover a long time ago."

Note: at the beginning of the show, CNN's Harry Enten said:

"This is a board of elections that has been, to be frank, as a resident of this city for pretty much my entire life, has been a disgrace. They've oftentimes had problems, oftentimes had delay voting counts. This is just the latest example of a problem of this city's board of elections. If, God forbid, New York City was in a swing state, I could just imagine what might be happening if the stakes were even higher than this."

As suggested above, does Enten believe that the rampant corruption of NYC's BOE is unique to the Big Apple? Does he imagine that election boards in swing-state cities like Detroit, Philadelphia, and Atlanta are all citadels of civic virtue?

CNN admitting that the New York City Board of Elections is "corrupt," but claiming that is a "uniquely New York problem" was sponsored in part by Servpro.

ERICA HILL: The New York City Board of Elections is throwing the New York City mayoral primary into chaos. The Board released new numbers suggesting Eric Adams' lead over Kathryn Garcia had narrowed. But then, hours later, the Board backtracked, after questions arose, and just pulled the results off the site at one point. In a statement, the Board explaining, "it has been determined that ballot images used for testing were not cleared from the election management system. When the cast vote records were extracted for the first pull of rank voting results, it included both test and election night results, producing approximately 135,000 additional records.

Joining us now, CNN senior political analyst John Avlon, who has worked for the Board of Elections, served on the voter advisory commission in the past. He's throwing up his hands in the break as we talk about this. There are really, I think, three key points when we talk about this. Number one, as you were saying to me in the break, we want to figure out how this happened, including how the test ballots were left in there, but you said you're not even convinced that that's actually what happened. What do you mean by that?

JOHN AVLON: There is absolutely no reason to take the Board of Elections at its word. Particularly because I question whether they're organized enough to run 135,000 test ballots, let alone given the fact they are too incompetent to erase that total apparently from the numbers they initially released.

Look: folks nationally may be scratching their heads. Folks in New York know this all too well. The New York City Board of Elections is a corrupt, incompetent, patronage organization. And this should give, just the latest reason it needs to be ripped up from the roots and totally rebuilt. This thing needs to be ripped up and reformed and turned into a nonpartisan, professional organization, not some relic of Tammany Hall that manages to screw up everything it touches.

HALL: So it is a uniquely New York City problem.

This is the ultimate potential tragedy of this. You've got a new system of voting put in place. People are going to blame that. You've got an ex-president wh's been trying to raise questions and concerns about the integrity of our elections. And then you have an election administration that can't do its job, which raises those questions.

And so folks will be going into their own camps and questioning the results of this mayoral election for a long time to come. So it cuts to the heart of the integrity of our elections, and that's what we need to be strengthening right now.

Look: if the New York City Board of Elections had been in the Deep South, this thing would have been the subject of a DOJ takeover a long time ago. That's how corrupt and incompetent it is.