Scarborough also repeatedly mentioning that he hadn't gone to an Ivy school. Boasting of his matriculation at the University of Alabama, he worked in several "Roll Tides."

But Scarborough got in some snobbery of his own, twice letting it be known that he's had Ivy Leaguers working for him since he was "23, 24." So who's the elitist now? He's also sitting next to his wife, who graduated from fancy-pantsy Williams College in Massachusetts. They like to summer in Nantucket, where Mika told the local magazine Joe has been "bringing his family....for fifteen years." But hey, Joe's had some moments of MAGA rebellion there, like sitting around maskless with Mike Barnicle last summer. Roll tide. 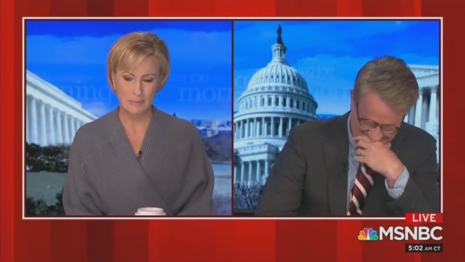 Note: Scarborough somehow failed to mention that that great anti-elitist, President Franklin Delano Roosevelt, was a Harvard man, as was another member of the Democrat pantheon: JFK. In more recent times, there's that great man of the people, John "Can I Get Me a Hunting License Here" Kerry, a proud Yale graduate. Not to mention Hillary "I Don't Feel No Ways Tired" Clinton, a Yale law alum.

Joe Scarborough ripping Republicans as elitists for having attended Ivy League schools was sponsored in part by Subway, Walmart, and Amazon.

On her Way Too Early show that precedes Morning Joe, Kasie Hunt took a real shot at Andrew Cuomo, indicating that, when it comes to the sexual harassment claims that have been made against him, Democrats must hold him to the same standard to which they held Republicans like Brett Kavanaugh.  Video at tweet.

"The reality is that when it was Republicans who were accused of these things, the mantra was: believe women. And that consistency is incredibly important."."

Here's the transcript of the Morning Joe segment.

TED CRUZ [at CPAC]: As we stand together: defend liberty, defend the Constitution, defend the Bill of Rights of every American. In the immortal words of William Wallace: freedom!!

MIKA BRZEZINSKI: [as Joe Scarborough laughs] Oh my gosh! What was that? We watched CPAC so you don't have to?

JOE SCARBOROUGH: You know, they obviously didn't have acting school at Harvard, or at Princeton for Ted Cruz.

From a young age, Ivy League people, they've all worked for me. They're pretty good workers. Roll Tide.

You're all Ivy League brats!

I went to Alabama and I'm proud of it. I love Ivy League schools cause, you know, like I said before, I've had people at Ivy League schools, they're pretty good workers. They've been working for me since I was 23, 24.