Heaven forbid we should insult the people who burned and looted Minneapolis and numerous other cities across the country after the death of George Floyd!

"That's insulting to rioters and generous to terrorists."

Such exquisite sensitivity from Swalwell! We certainly hope that the feelings of rioters and looters across the US weren't too hurt by Capehart's thoughtless remark! Wonder if they will sue Jonathan for slander?

Capehart didn't flinch in response to Swalwell's absurd comment. When Swalwell finally wound down in describing his experience in the Capitol during the breach, Capehart, without commenting on the "insulting" remark, moved directly to asking Swalwell whether he thought President Trump should be impeached. Of course, Swalwell favored it.

Then, when Capehart referred to a letter from Republicans to Nancy Pelosi asking that she not push for impeachment because it would be divisive, Swalwell made clear he was in no mood for coming together, making this astonishing statement: 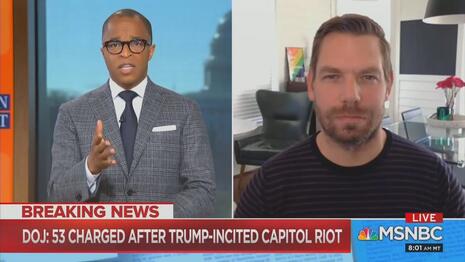 Swalwell sounds like a character out of '1984': attacking your political opponents is unity!

Note: speaking of sensitivity, Capehart was much too considerate to consider raising with Swalwell his ties, and possible romantic relationship, with a Chinese spy.

Eric Swalwell saying it was "insulting to rioters" to call the people breaching the Capitol "rioters" was brought to you in part by Oscar Mayer, Proctor & Gamble, maker of Gain, and Crest.

JONATHAN CAPEHART: Joining me now, Congressman Eric Swalwell, who was on the House floor when rioters breached the Capitol. Congressman Swalwell, thank you for being here. Glad you are safe. Tell us your experience of January 6th.

ERIC SWALWELL: Well, congratulations on the show also, Jonathan. And calling them rioters is generous to — it’s insulting to rioters and generous to terrorists.

CAPEHART: Well, Congressman Swalwell, given what you just described and what the American people saw with their own eyes on Wednesday, do you support the effort that's likely to start tomorrow to impeach President Trump a second time?

There are your Republican colleagues in Congress who are saying, no, no, no, don’t go for impeachment. They even sent a letter to Speaker Pelosi demanding that she stop the effort that's building within the Democratic caucus to impeach the president a second time, saying that that would be divisive. Your reaction to that.

We are uniting against people like Kevin McCarthy, Ted Cruz, Josh Hawley, the President of the United States who incited and radicalized the terrorists who took the capitol. We are united. We’re just united against the people responsible for this attack.