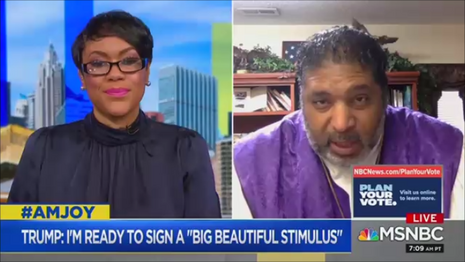 Even before the pandemic, many Americans were struggling, and COVID has only added to the challenges. We need to be compassionate, and indeed, the stimulus packages — already adopted and to come — have provided trillions of dollars of relief to millions of Americans.

That said, it is wrong, and unhelpful in developing appropriate policies, for advocates to exaggerate the nature and extent of the problems. Yet that is exactly what happened on MSNBC's AM Joy show this morning.

First, guest host Tiffany Cross claimed that, while awaiting the conclusion of negotiations on the new stimulus package, Americans are "starving." Other than people who have fallen off the grid due to addiction or mental illness, perhaps Cross could tell us how many Americans have starved during these negotiations.

Even more egregiously, the Rev. William Barber, a poverty advocate and regular MSNBC guest, offered up some statistics that can only be called insane.

He claimed that even before the pandemic, there were 140 million Americans in poverty, and that another eight million have since been added. A total, thus, of 148 million Americans, according to Barber. That would be equal to 45% of the US population in poverty! The true number is about 10.5%.

So Barber exaggerated the number of Americans in poverty by about four times. But that was small potatoes compared to his absolute whopper when it came to deaths. Barber claimed that, even before COVID, 250,000 Americans were dying "a day." That would equal 91 million yearly deaths -- equal to one quarter of the population dying annually! The  number of daily deaths is actually about 7,900. So Barber inflated the true number by . . . 31 times!

MSNBC's insane claims were sponsored in part by Ninja Foodi.

TIFFANY CROSS: For the people who are watching and hearing, what’s at issue here? So I thought that Pelosi spoke with Treasury Secretary Steve Mnuchin. It seems one of the big issues is national testing--that they don’t want certain aspects, they want to leave the national testing to the local states. They think it should be handled at the states level. What’s the problem with that? And how is this the sticking point while people are hungry and starving?"

REP. HAKEEM JEFFRIES: Well, the pandemic is not over for any of us until it's over for all of us.

CROSS: I want to bring in now Bishop William Barber, who's the co-chair of the Poor People’s Campaign, and author of "We Are Called To Be A Movement." Bishop Barber, I’m so happy to have you with me on this Sunday morning, because you and I have talked about the stark reality for the American people all across this country as 8 million people have plunged into poverty. What’s your thought on the current situation, and how can we connect the humanity of what’s happening with the political maneuvering in Congress?

WILLIAM BARBER: Well, thank you so much. Here is the — let’s make it plain. You cannot get out of this without dealing with the issue of poverty and low wealth. And I’m saying that to all of the politicians. We got to say poverty ought to be the upfront issue.

We already had 140 million people in poverty, 250,000 dying a day before COVID. Now wer're saying, eight million more people have fallen into poverty since May and Tiffany, this is not being discussed.