If it weren't so disgustingly dishonest, it would be hilarious. MSNBC, with a helping hand from a Lincoln Project Never-Trumper, has uncovered a Communist who has somehow managed to infiltrate himself into a lofty elected position.

And it's none other than . . . Republican Senator Mike Lee, from that hotbed of seething Stalinism, Utah!

Jonathan Capehart, guest hosting AM Joy on MSNBC today, said that he had invited Stuart Stevens of the Lincoln Project on to discuss a tweet from earlier in the week in which Lee had written:

"Democracy isn’t the objective; liberty, peace, and prosperity are.  We want the human condition to flourish.  Rank democracy can thwart that."

Lee's point was clear to anyone who understands our founding and Constitution. Instead of a pure democracy, we have a constitutional republic, a key goal of which is to protect the rights of the minority. 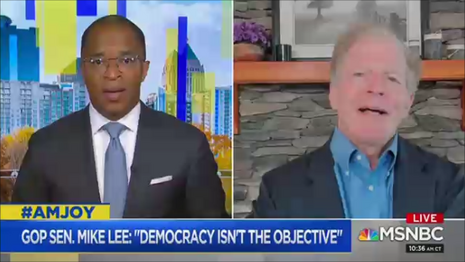 But Stevens chose to misinterpret Lee in the most outrageously dishonest way, analogizing Lee, and the Republican party at large, to nothing less the Communist Party of the Soviet Union! Stevens said that Lee's tweet:

As David Harsanyi wrote at the National Review in defense of Lee's tweet:

Who's next on the Left's little list of red moles in the US government? Tune in next week: perhaps MSNBC will reveal that Rafael Cruz was sent here from Cuba as a deep plant, and that his spawn Ted Cruz is a cat's-paw of the Cuban commies!

This bizarre MSNBC/Stuart Stevens red-baiting of Mike Lee was sponsored in part by Allstate, Gold Bond, and NordicTrack

JONATHAN CAPEHART: This tweet, from Utah Senator Mike Lee on Thursday, where he tweeted out: "we’re not a democracy." Followed by, "Democracy isn’t the objective: liberty, peace and prosperity are. We want the human condition to flourish. Rank democracy can thwart that."

Stuart! What in the entire — I can’t curse on TV. What’s going on?

STUART STEVENS: I tweeted in response to that. That basically is, sums up the position of the Communist Party in the Soviet Union for 75 years. You don’t need democracy to help the people.

I really — what’s happening now in the Republican party, when you’re in the middle of something it’s always difficult to really understand it. But it is a complete moral collapse of a party unlike anything we’ve seen, I think in American history.

Strangely, I think the only thing you can compare it to is the collapse of the Communist Party in the Soviet Union.