Al Sharpton: 'Defund the Police' Is Nonsense for Latte Liberals in the Hamptons

How dangerous have things gotten in the New York City under Bill de Blasio and Andrew Cuomo? So bad that even Joe Scarborough has to grudgingly admit that things were a lot safer under Mayor Rudy Giuliani. So dangerous that even Al Sharpton has to oppose defunding the NYC police, saying that notion is something for "latte liberals" sitting around in the Hamptons.

Those surprising statements were heard on today's Morning Joe. NYC resident Willie Geist was left as the sole defender of the city, claiming that, unlike others, he feels safe. But in a bit of unintended gallows humor, Willie insisted that the crime statistics were really not up -- well, except for "shootings and murders."

Sharpton clearly felt the need to balance his opposition to defunding the police with lip service to liberal pieties. Thus, he described the spurt in shootings as due to people being "given guns." And he euphemistically described the shooters as "the users of products of the big gun manufacturers in this country."

Note: When it comes to Rudy Giuliani, Morning Joe is much more inclined to make snide insinuations about his drinking. But, Scarborough ultimately admitted— "I'll say it"—that things were a lot safer during Rudy's day, rather than under the abysmal leadership of De Blasio. 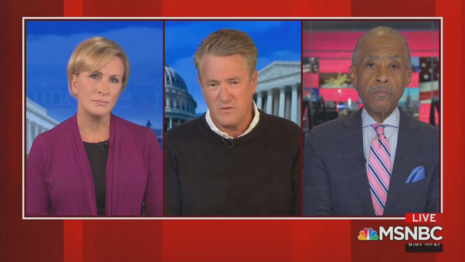 JOE SCARBOROUGH: So has is -- I haven’t been back to New York since the end of February. How is New York City doing? Is it like Fort Apache, the Bronx?

WILLIE GEIST: It’s strange. Do I feel unsafe? No. As you've read these blaring headlines, of course I don't. It's New York City: we're going to be okay.

SCARBOROUGH: You said that you feel safe there. What we read in the newspapers, far away from you big-city folk, is that crime has gone up. We've friends saying, man, I don’t feel safe, even in the ‘70s [the streets of the tony Upper East and West Sides] after dark. Which of course, remarkable thing about New York City post — well, I’ll say it, let me just say here, post-Rudy Giuliani, is after dark you can walk around most of New York City and actually feel safer than in most other major American cities. But all we’re reading, all we're hearing, and even friends are telling us: it is dangerous, Joe, it's nothing like it's been over the past 20 years. You don’t feel that?

GEIST: I’m just speaking for myself, walking around New York City does not feel different or unsafe to me. And I think if you look at the crime statistics that’s probably true. But there are more shootings, there are more murders.

AL SHARPTON: I would say statistically, we’re not much higher than we were. But on the ground it is certainly feeling more violent, feeling more unsafe, in unsafe communities.

SHARPTON: I’ve said, and you and I have discussed this, we need to reimagine how we do policing. But when you are talking about the fact that, A: we are in the areas where — that is inundated with guns, that has this serious problems of our — of people being given guns that can’t even get a summer program, to take all policing off is something I think a latte liberal may go for as they sit around the Hamptons discussing this as some academic problem. But people living on the ground need proper policing. Yes, we need more resources in different areas like mental health. But we do not need our grandmothers prey to those that are being the users of products of the big gun manufacturers in this country.