Morning Joe's theme of the day on Wednesday was that President Trump really doesn't want to win re-election. That chatter continued today, with added speculation about the possibility that the president might simply quit the race altogether.

Donny Deutsch then ginned up a scenario in which President Trump, after either losing or dropping out of the race, would create the Trump Revolution Network, get six million of his followers to subscribe at $6.99/month, and make $600 million a year [by Deutsch's math, the number would actually be $503,280,000—close enough for liberal-media work.] 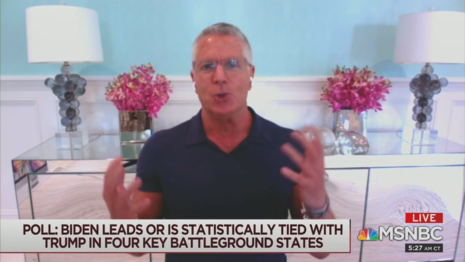 Note that Donny floated the virtually identical notion in August, 2016. Here was how The Blaze reported it then:

According to Deutsch, Trump could easily generate $600 million-$700 million a year by setting up a subscription television network.

"What does he love to do? He loves to talk and be the center of attention," said Deutsch. If only 20 percent of Trump's estimated 40 million supporters would pay $6 per month to subscribe to "Trump TV," Deutsch estimates the GOP candidate would generate as much as "three-quarters of a billion dollars a year."

So you might say Donny's into recycling, though his 2016 prediction that "Donald Trump is not winning this election" came a loser.  For that matter, when it comes to predicting the political future, Joe Scarborough's track record isn't particularly good, either. As we noted last year:

In June 2016, Swami Scarborough declared that compared to the drubbing that Trump was about to endure, Barry Goldwater [who lost 44 states plus DC] is going to look like an extremely successful candidate. And last year, Scarborough predicted that Trump wouldn't even run in 2020.

DONNY DEUTSCH: Joe, I just want to go back to where you started the show, where, your thesis that this guy is doing every single thing to lose. And you go, is there a chance he wants to?

Let me just tune up a Trump thing. The one thing he’s never been able to do with the presidency he wants is monetize it. Imagine if Trump loses or drops the mic, and out of those 60 million people that voted for him, six million  join the Trump Revolutionary Party and the Trump Revolutionary Network at $6.99 a month and he makes $600 million a year.

It’s a way for him to come out and finally monetize this thing. And don’t think he won’t say to himself, I’m still the president of a third of this country but I’m going to monetize it. Look for the Trump Revolutionary Network $6.99 a month. That’s Trump's drop-the-mic moment. It’s not that crazy.

JOE SCARBOROUGH: No. And I know you’re laughing about it, but he’s been thinking about how to monetize this from the beginning. He didn’t expect to win. He was shocked he won. And you’re exactly right. If he can have a hard core 35% of Americans believing his conspiracy theories, following him over the cliff as they have. Even people with children who are sick, following him over the cliff. I’ve never seen anything like it before in my life. Then yes, they’ll pay $6.99 to listen to the Trump Revolution Network or whatever he would decide to call it. So you’re laughing about it. I’m not laughing about it at all.