In his later life, George Wallace repeatedly repented for his segregationist sins. And many, including some of his former foes, were willing to accept his apologies. Thus, for example, after Wallace's death, civil rights activist, former Freedom Rider, and now congressman John Lewis wrote a New York Times column entitled, "Forgiving George Wallace," which concluded with these words: "George Wallace deserves to be remembered for his effort to redeem his soul and in so doing to mend the fabric of American society."

But CNN commentator Bakari Sellers, it seems, is not the forgiving sort. On Tuesday's New Day, speaking of the use of force to clear protesters prior to President Trump's appearance in front of St. John's Episcopal Church, Sellers said:

"The only thing I could think of was George Wallace is probably looking 'up' at him with a smile."

Viewing the video, you'll note Sellers emphasis on the word "up." The implication was unmistakable: Bakari Sellers has consigned George Wallace to Hell. And by extension, Sellers was also suggesting that President Trump is a kindred spirit with the bad, old, segregationist Wallace, presumably also meriting the eternal flames.

This past December, President Trump used that same "looking up" line in respect of the late Democrat Congressman John Dingell. Trump was roundly criticized for the remark, including by CNN editor Chris Cillizza, in a column entitled: "Donald Trump's disgusting and deplorable attack on Debbie Dingell."

Don't expect Sellers to experience anything similar. His refusal to forgive George Wallace, and his analogy of Trump to Wallace, will likely be met with nodding approval in liberal media circles. 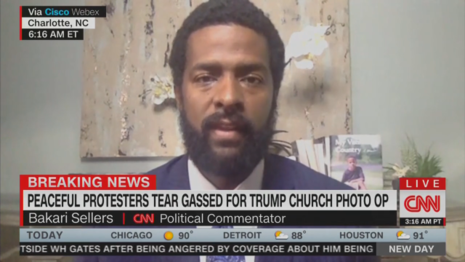 "How does a violent shutdown of peaceful protesters in front of the White House so the president can take a picture, how does that make [the current situation] better?"

Note also that in describing what CNN depicted as "America in Crisis," Berman omitted any mention of the widespread burning and looting by rioters. The liberals and their media outlets aren't criticizing whoever set this church on fire. They're only criticizing the president for standing in front of it.

JOHN BERMAN: Breaking overnight, America in crisis. We are following new reports of attacks on police officers overnight. This comes after we all saw attacks on peaceful protesters outside the White House. They were teargassed so that President Trump could take a picture in front of a church.

Bakari, I want to start with you. And let’s just establish a baseline here. I think we need to acknowledge that the baseline here is that America is in crisis, and there’s a patchwork of things all going on at once here. 105,000 Americans have died in a pandemic. 40 million Americans have lost their jobs. We’re seeing videos of black men being killed by police officers. Police officers were shot overnight. It’s all happening.

So a goal should be to make it better. So my basic first question to you is, how does a violent shutdown of peaceful protesters in front of the White House so the president can take a picture, how does that make it better?

BAKARI SELLERS: Yeah, and in your analysis, John, one of the other things that we have to mention is years of systemic racism and injustice that have plagued black communities for a long time that are now overflowing in the streets.

Look, yesterday, the President of the United States used teargas, he used the military against peaceful protesters. The only thing I could think of was George Wallace is probably looking 'up' at him with a smile. 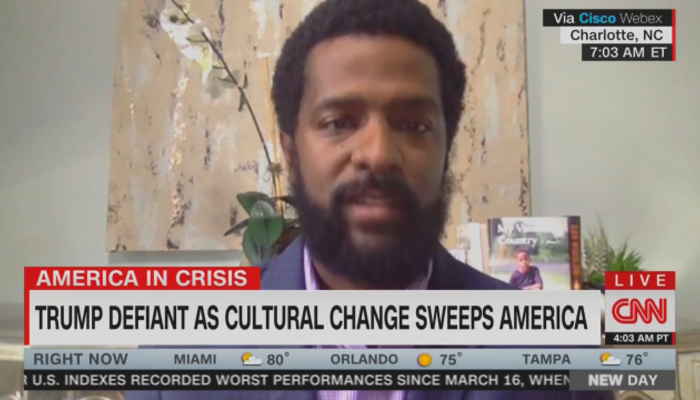 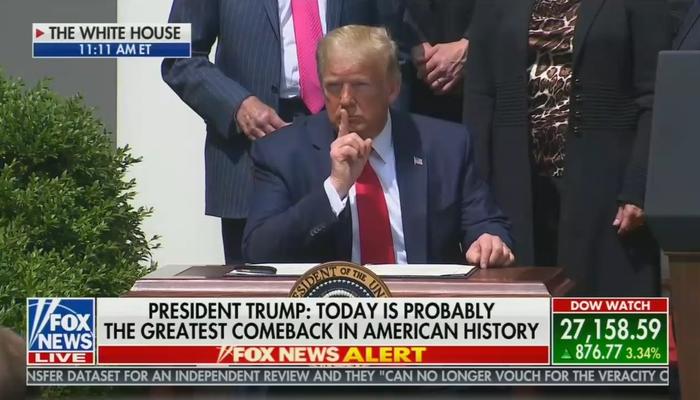