Laugh line of the morning comes from Cokie Roberts' Wikipedia entry: "Some have questioned Roberts' objectivity as a journalist." Some, indeed. On today's Morning Joe, NPR-ite Roberts, her eyes flashing with anger, asked Donald Trump whether he was "proud" of promoting racism among schoolkids: "There have been incidents of children, white children, pointing to their darker skinned classmates and saying 'you'll be deported when Donald Trump is president.' . . . Are you proud of that?"

Calling it a "very nasty question," Trump replied "I'm not proud of it because I didn't even hear of it. And I don't like it at all when I hear about it." Roberts said that it's been reported in many papers, presumably alluding to articles such as this and this. You've got to read the transcript and view the video to get the full effect.  Cokie's doing it for . . . the children.

ROBERTS: [grudgingly] Hi Mr. Trump. There've been incidents of children, of white children, pointing to their darker-skinned classmates and saying "You'll be deported when Donald Trump is president." There have been incidents of white kids at basketball games holding up signs to teams which have hispanic kids on them saying "We're going to build a wall to keep you out." Are you proud of that? Is that something you've done in American political and social discourse that you're proud of?

TRUMP: Well, I think your question is a very nasty question. And I'm not proud of it because I didn't even hear of it, okay. And certainly don't like it at all when I hear about it. You're the first one that's told me about that. But I would not be proud of that at all.

ROBERTS: It's been reported in many newspapers. 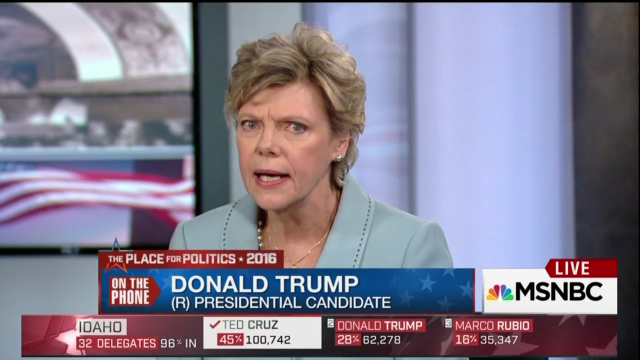 TRUMP: I talk about deporting people who are here illegally. And I also talk about people coming in.

TRUMP: We either have a country, or we don't. I talk about deporting people that are here illegally.

ROBERTS: But what about the affect on children?

ROBERTS: But what about the children, Mr. Trump? What about what the children are hearing from you and how they are responding to it?