BLM Leader to Harris-Perry: No Need to Apologize for 'Pigs in a Blanket, Fry 'em Like Bacon'

After tape rolled of Black Lives Matter demonstrators repeatedly chanting "pigs in a blanket, fry 'em like bacon," you might have thought a BLM leader would either apologize, or at least seek to miminize the incident as the excesses of an irresponsible and unrepresenative few.

But no.  On today's Melissa Harris-Perry show, after just such video was played, BLM leader Monica Dennis issued not one word of apology. To the contrary, Dennis said "there is no need to apologize" for what the BLM movement is "putting forth," and touted the group's intention "to resist" the police. The segment began with a clip of Ted Cruz denouncing the "rabid rhetoric" of groups like BLM.  Harris-Perry declared that "when it comes to a rabid movement I'm going to go with the GOP primary over Black Lives Matter."

Let's break down what Monica Dennis, the BLM said: "we expect police departments across the country to protect us, to maintain our safety. And when they do not, we will resist." And by "resist," Dennis apparently believes there is nothing to apologize for in advocating the murder of police. Remember, Black Lives Matter is the movement that the Dem candidates unanimously embraced during last week's debate.

TED CRUZ: If you look at the Black Lives Matter movements, one of the most disturbing things is more than one of their protests have embraced rabid rhetoric, rabid anti-police language, literally suggesting and embracing and celebrating the murdering of police officers.

MELISSA HARRIS-PERRY: So that was Senator Ted Cruz talking to Think Progress earlier this week. So here's what I want to acknowledge. There is this kind of one, few-seconds moment in one Black Lives Matter protest that got caught on--caught on tape is maybe the wrong way to think about it, but that we've heard from. So maybe we want to listen to that for a second, because I think it will give us a sense that, then. This was at the Minnesota state fair, about what they're responding to, and then I'll come to you on that.

HARRIS-PERRY: So, you're looking at a national movement operating on all these different levels. That though becomes the video that says, oh this is a violent anti-police movement. But I've gotta say when it comes to rabid rhetoric, I'm going to go with the GOP primary over Black Lives Matter as a consistent place for rabid rhetoric.

MONICA DENNIS [BLM leader]: I would have to give you a high five on that, for sure. Again, I think it's so interesting, the focusing on anybody that chooses to say we want to stay alive. We expect police departments across the country to protect us, to maintain our safety. And when they do not, we will resist. So whether it's rhetoric that makes people feel uncomfortable or actually people just standing up and saying the truth of what it is, there's no need to apologize for what it is that Black Lives Matter is putting forth: the right to be safe and to live, simply that. 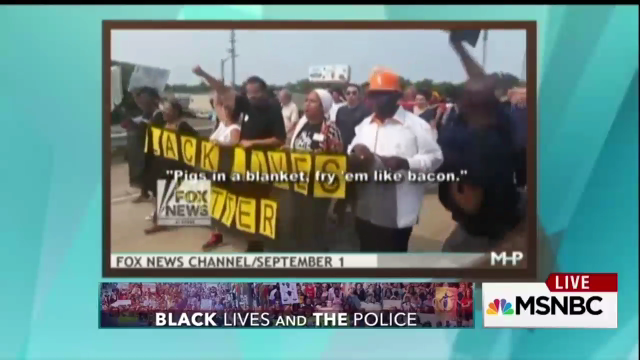