It is now Tuesday, marking one week since the mass shooting in Uvalde, Texas that killed 21 people. On MSNBC’s Morning Joe, like many other media outlets, the aftermath of the devastation continues to be the main topic of discussion. This time they teamed up with New Yorker staff writer Jelani Cobb to decry “Second Amendment fundamentalists” and political “zealotry” on the right.

Morning Joe co-host Willie Geist once again led the conversations on the show, leaving viewers feeling more inclined to listen. Surprisingly though, main host Joe Scarborough only made a small appearance on his show via video chat.

Throughout the duration of this miniscule appearance, he repeated the same things that he has been ranting about for the past seven days: The Republicans are too cowardly to stand up to the NRA, Mitch McConnell “never gets too far from the Republican caucus”, the right loves to politicize this gun issue, Governor Abbott and Senator Cruz are the bad guys, and the GOP is always taking the blame away from guns regarding these issues.

Scarborough’s ranting was expanded on during Geist’s interview with Cobb when talking about his most recent article titled “The Atrocity of American Gun Culture.” In his article, Cobb criticized officials’ “political cowardice” and “sham of public displays of sympathy” when they are taking zero actions to prevent future tragedies. He further blamed “Second Amendment fundamentalists and politicians who translate their zealotry into law” for the lack of action.

Geist asked Cobb, “so when people say it shouldn't be political, you say what?” Cobb answered by exclaiming that this issue is definitely “inherently political” and called out officials’ acts of “moral cowardice.” He gave examples of Ted Cruz, and “other people who were on the podium during that first press conference telling people not to politicize what was happening.” 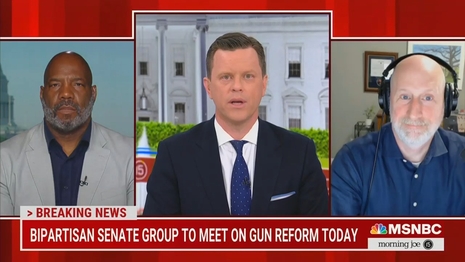 He additionally blamed “public policy” and the “lobbyists and politicians who do their bidding” for the shooting and other past shootings.

Host of MSNBC’s Way Too Early, Jonathan Lemire also had a question for the staff writer. He talked about President Biden by expressing how he “played the role once again of Consoler-in-Chief with his trips to Buffalo and Texas” and asked Cobb “How do you want to hear him frame this issue, this American tragedy with guns?”

Cobb responded by saying that “we could publish an anthology of eulogies presidents have delivered under these circumstances,” criticizing past presidents' useless “thoughts and prayers” dynamic that has never brought about effective gun policy change.

He praised Biden, saying that “he has done a good job of framing this conversation”, saying that the empathetic part of his personality is what appealed to voters.

It seems that Cobb forgot that Biden is not the only politician to show this empathy publicly. Most politicians love to show how empathetic they are towards others. That is how these career politicians get elected. Biden is no different than the presidents who came before him, so why award him a gold star?

This example of media bias was sponsored by Lincoln and Sling TV.

WILLIE GEIST: Let’s bring into the conversation staff writer at ‘The New Yorker’ Jelani Cobb. He’s the incoming Dean at Columbia University’s School of Journalism and senior editor at ‘The Dispatch’, David French. He is a columnist for ‘The Atlantic’.

Gentleman, good morning to you both, I want to read from your respective pieces, Jelani in your recent op-ed titled ‘The Atrocity of American Gun Culture’, you write this quote “In a single ten-day stretch, 44 people were murdered in mass shootings throughout the country. A carnival of violence that confirmed, among other things, the political cowardice of a large portion of our elected leadership, the thin pretense of our moral credibility and the sham of public displays of sympathy that translate into no actual changes in laws, our culture or our murderous propensities.

The circumstances that make mass murder of fourth graders possible are inherently political. The legal access to the weaponry involved is political. The most visible people refusing to see these things as political happen to be elected to political office. Some of this is on Second Amendment fundamentalists and politicians who translate their zealotry into law--the rest is on every one of us who has yet to find the courage to stop it.”

That was a portion of Jelani’s piece in ‘The New Yorker’, so Jelani I will let you flesh that out and add some context. The polling we saw again last week that shows almost nine out of ten Americans want universal background checks, even two-thirds of Americans in the Politico say we should outlaw these semi-automatic assault-style rifles that are so often used in these mass shootings, so when people say it shouldn't be political, you say what?

JELANI COBB: I mean, it is inherently political. There's no way around it. We're look at the culmination of political decisions. The reason that the shooter here, the shooter in Charleston and the shooter in Buffalo, too many shootings to list, but the reason they've been able to gain access to these high powered weapons has been as a result of possible policy.

When you say that people commit explicitly political acts and the response you heard from Senator Ted Cruz, you heard from the mayor of Uvalde, you heard from other people who were on the podium during that first press conference telling people not to politicize what was happening was an astounding statement of just moral cowardice in my estimation.

GEIST: So how do we break through that, Jelani? Let’s try to be constructive this morning. We’ve got a total disconnect between what appears the American people want done around the issue of guns and what leaders in Washington are willing to do on guns. How do we change that dynamic?

COBB: I don't know how we change that dynamic, and you know that's one of the frustrating things about this because we have a democracy in which we're supposed to see the will of the public translated into law. But we’ve actually seen that stymied by the influence of a small number of people, lobbyists and politicians who do their bidding and so on.

But I have to say one thing about background checks and the other kinds of small measures that people are now touting, we're now relieved of the possibility, the frail possibility of making small changes for gigantic problems. Those things are just not going to save the next fourth grader in line of site of an AR-15.

JONATHAN LEMIRE: Hey Jelani good morning, it’s Jonathan Lemire there’s no question in a moment like this- actions mean more than words. We hear that from the victims' families, we hear that from civic groups, we hear that from so many Americans. But words do matter to a point. What would you like to hear from President Biden who has in recent days played the role once again of Consoler-in-Chief with his trips to Buffalo and Texas, he showed some fire on the issue, he says that change must be done. But what do you want to hear from him. How do you want to hear him frame this issue, this American tragedy with guns?

COBB: I mean, I think unfortunately we have-we could publish an anthology of eulogies presidents have delivered under these circumstances. One of the things that made Joe Biden appeal to many of his voters was the fact he did broadcast a sense of empathy about his personality, how he operated as a political office holder.

I think he has done a good job of framing this conversation, of talking empathetically, making the demand, placing the kind of moral onus on the Congress to actually do something. The problem is how much that translates into actual activity. We haven't seen any of the eloquence of any of the presidents who addressed this issue translate into substantial change in the state of affairs we're dealing with.