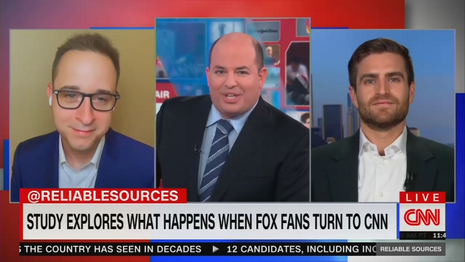 On Monday, The Blaze’s Carlos Garcia reported that “CNN’s media critic Brian Stelter was stunned when an expert brought on his network to discuss bias at Fox News also criticized CNN for left-wing bias,” during Sunday’s Reliable Sources. “Stelter interviewed two researchers from the University of California at Berkeley, who conducted a study where Fox News viewers were paid to watch CNN and their reactions were documented and analyzed,” the article explained.

As Stelter gleefully touted the study showing “Fox viewers are in the dark about bad news for the GOP,” Garcia pointed out that one of the researchers, Professor Joshua Kalla, provided the full picture: “That’s right. Fox and CNN cover different issues, and Fox News predominantly covers issues that make the GOP look good, and make Democrats look bad. On the flip side, CNN engages in this partisan coverage filtering as well, we find.” A flustered Stelter immediately whined: “I think you’re engaging in some both-sides-ism there.”

Read the full article at The Blaze.