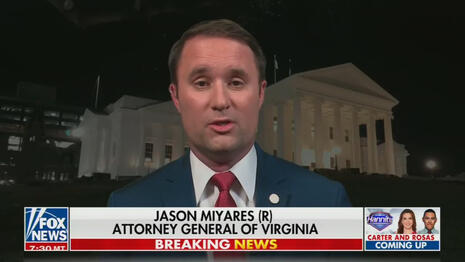 On Wednesday, Daily Wire News reported on how “Virginia Attorney General Jason Miyares slammed CNN host Jim Acosta on Wednesday night for suggesting that the commonwealth is now a ‘soviet-style police state’ under Republican Governor Glenn Youngkin.” That came after Acosta ranted Tuesday night: “I seem to remember Glenn Youngkin campaigning in a fleece vest in Virginia....I was told there was going to be a vest, not a Soviet-style police state across the Potomac from Washington.”

The article explained: “Miyares responded to Acosta’s remarks during a Fox News interview with host Sean Hannity on Wednesday night, saying, ‘I think what Jim Acosta said — listen, my family fled Communist Cuba. You want to talk about what ‘Soviet-style’ looks like? It’s the opposite of freedom.’” The piece noted: “Fox News reported that Miyares’ uncle had been arrested at night by communist Cuban dictator Fidel Castro’s secret police and that their home was ‘nationalized: in the name of fairness and equity.’”

Read the full article at The Daily Wire.