ABC’s Good Morning America and CBS This Morning completely ignored a profane and explicit death threat included with a suspicious package sent to the home of Republican Kentucky Senator Rand Paul. Meanwhile, NBC’s Today show covered the disturbing story, but only offered 20 seconds and never displayed or described the vile threat to kill the GOP lawmaker.

“This morning, the FBI is examining a suspicious package sent to the Kentucky home of Senator Rand Paul,” co-host Savannah Guthrie vaguely noted during a news brief at the top of Today’s 7:30 a.m. ET half hour. She pointed out how “the package contained a white powder” but that it was “unknown who sent it or if the Senator was in Kentucky when the package arrived.”

Astonishingly, the phrase “death threat” was never uttered. Instead Guthrie referenced: “The Senator reacted to the incident on Twitter, saying, quote, ‘I take these threats immensely seriously.’”

Fox News obtained a copy of the threatening image depicted on the outside of the envelope: 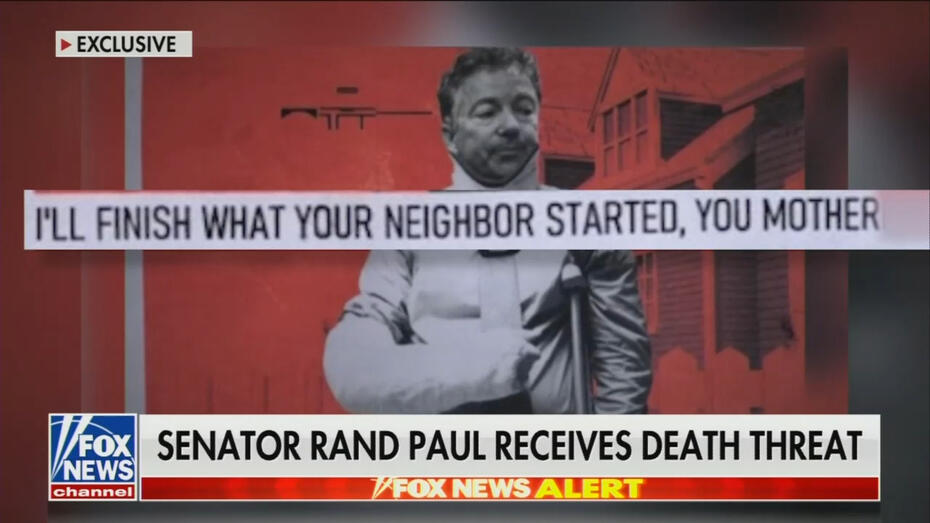 It clearly shows Senator Paul in a cast, neck brace, and on a crutch following a 2017 assault by a neighbor and the caption of the photo reads: “I’ll finish what your neighbor started, you motherf***er.” In addition, an image of a gun is clearly shown pointed at the Senator’s head.

Guthrie incredibly never provided viewers with any of those shocking details.

When a left-wing lawmaker is even criticized in a civil and respectful manner, the media throw a fit. However, when Republican member of U.S. Senate is clearly threatened with murder, the liberal press yawn.

The profoundly watered down Today show report that skipped key facts was brought to viewers by Chase and Neutrogena. You can fight back by letting these advertisers know what you think of them sponsoring such content.