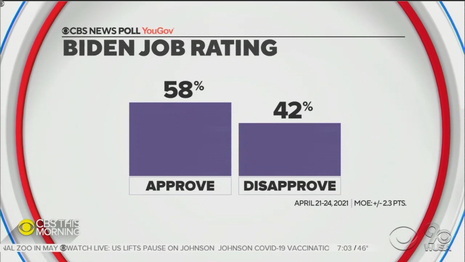 While all three broadcast networks spent Sunday and Monday touting new polls showing general approval for President Biden’s job performance after his first 100 days in office, the liberal media outlets managed to cover up several negative findings for the Democrat, found in the same surveys. Some unflattering numbers were mentioned or vaguely alluded to, but many were not.

CBS was the most brazen when it came concealing bad news for Biden in its polling data. Despite finding 57% of Americans disapproved of the President’s handling of the illegal immigration crisis at the U.S. southern border, with only 43% approval, the network coverage never cited those numbers.

The only reference to the issue was this vague observation from correspondent Christina Ruffini on Sunday’s CBS Weekend News: “Then there’s what even President Biden now calls a crisis, the influx of migrants at the southern border.” Unbelievably, she didn’t tell viewers about her network’s own poll results on the topic.

In addition, CBS News broadcasts ignored the fact that 53% of poll respondents disagreed with Biden being described as “unifying,” with 47% agreeing. Another series of questions found that a plurality of Americans feared things would “get worse” in the coming months of the Biden presidency on a variety of fronts:

Hardly expressions of resounding faith in Biden’s leadership, yet missing from CBS’s on-air reporting of its poll.

NBC was somewhat better at acknowledging at least some disapproval of Biden. On Monday’s NBC Today show, in an otherwise upbeat report, correspondent Geoff Bennett noted: “His lowest scores come on dealing with immigration [33% shown on screen] and security at the southern border.” On Sunday Today, Meet the Press moderator Chuck Todd alluded to “warning signs” in the polling: “...on immigration and on taxes he’s upside down, but it’s not bad enough that it impacts his overall number.”

However, the actual disapproval numbers of Biden’s left-wing tax and spend policies were never actually uttered or displayed. 48% of Americans disapproved of his handling of fiscal matters, with 44% approving.

When it came to the major foreign policy challenge of China, 44% disapproved of the President’s approach, with only 35% approving.

Beyond specific issue areas, NBC pollsters asked participants what kind of start they thought Biden was off to so far. 55% characterized it as “fair” or “poor,” while only 44% thought the early days of the administration showed a “great” or “good” performance. Again, NBC’s broadcasts avoided that detail.

ABC News was actually the most responsible in it’s poll coverage. On Sunday’s Good Morning America, co-host Dan Harris admitted: “52 percent of Americans approve of Joe Biden's work in office as he approaches the 100-day mark. That is ten points higher than Donald Trump at this point in his presidency, but 17 points lower than Barack Obama.” The network’s political director Rick Klein fretted: “What’s so striking here is, you can at the same time say President Biden is in so much stronger position than his predecessor, but so much weaker than almost everyone else that we’ve seen at this point in a presidency.”

On Monday, correspondent Cecilia Vega reiterated those points and also noted: “On immigration, that is a big issue for this White House, what’s happening at the southern border continues to perplex this White House here, just 37% of people say that they approve of the job he’s done here.” She also highlighted that the public wanted Biden to compromise: “Six out of ten say even if that means compromising with some members of Congress on some of these bigger priorities for the White House.”

What ABC failed to cover on air about the poll was that 53% of Americans were “concerned that Biden will do too much to increase the size and role of government.” In addition, the poll found: “Relatedly, 40 percent see him as ‘too liberal,’ more than said so about either of his most recent Democratic predecessors at 100 days – Barack Obama, 33 percent, and Bill Clinton, 26 percent.”

Beyond those findings, the survey found 48% of respondents favored “smaller government” vs. 45% favoring “larger government.”

It’s fair to say that a majority of Americans approve of Biden’s job performance so far – following 100 days of his liberal media allies providing overwhelmingly positive coverage of his presidency – but there are many red flags for the Democrat when one looks at the numbers more closely.

Of course those unflattering facts don’t fit the celebratory narrative the leftist press wants to push ahead of Biden’s address to Congress on Wednesday.