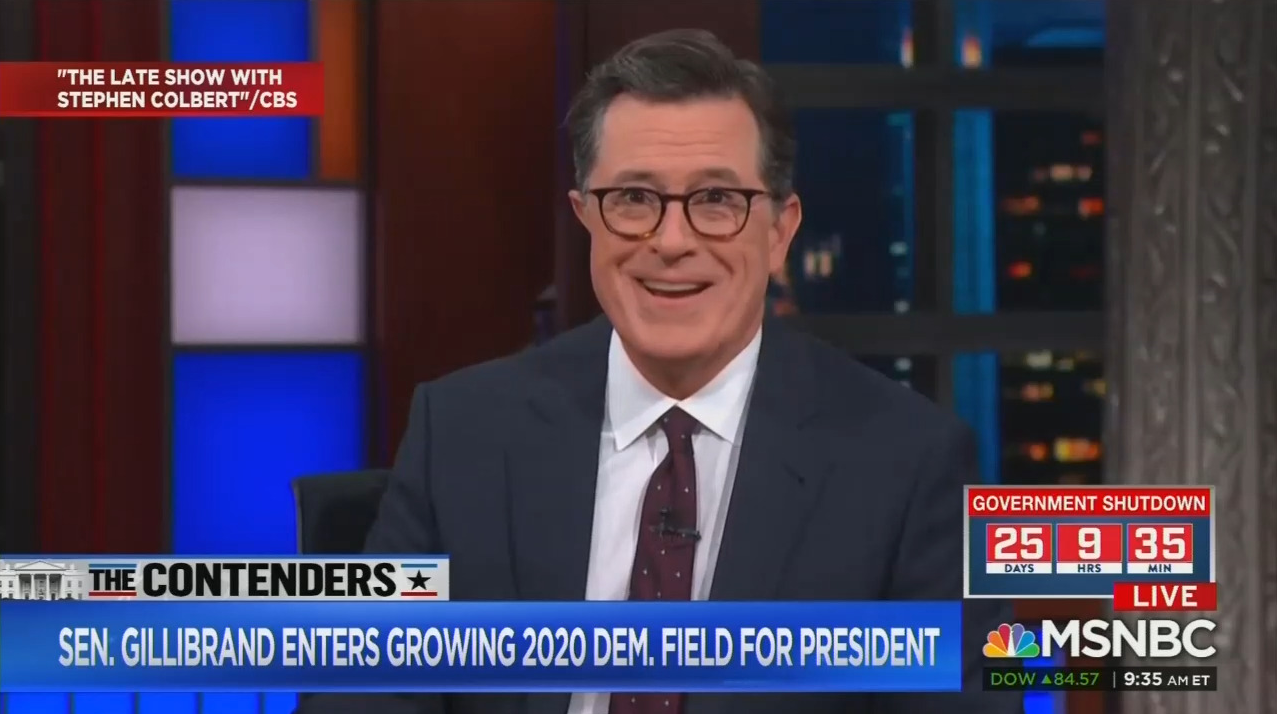 “Welcome to the Stephen Colbert primary,” that was headline of an online article written by CNN Reliable Sources host Brian Stelter on Monday, as he touted CBS’s Late Show “proving to be a key stop for Democrats who are positioning themselves for 2020 presidential bids.” On Wednesday morning, MSNBC echoed the sentiment, proclaiming the liberal late night comedian to be an “unofficial power broker” in the Democratic primary.

Writing for CNN Business Monday, Stelter ran down the list of potential 2020 Democratic contenders who recently appeared on the show: “Sen. Bernie Sanders sat down with Colbert one month ago. So did former HUD secretary Julián Castro. Sen. Kamala Harris was there last week. And Sen. Kirsten Gillibrand is expected to share some news about her presidential aspirations in an interview on Tuesday’s show.”

In fact, on Tuesday night, Gillibrand officially announced her presidential bid to Colbert in a ridiculously softball interview in which the two literally held hands.

“Colbert’s studio is a logical place for Democrats to tease presidential campaign plans. He has a liberal fan base dating back to his days on Comedy Central, and that audience crystallized after Colbert took aim at then-candidate Donald Trump in 2016,” Stelter explained. Noting that “Colbert is said to be keenly aware of his power broker status with the Democratic electorate,” the CNN anchor added that the Late Show host “also knows he is hosting a late-night talk show, not an MSNBC broadcast.”

Colbert has become a sort of unofficial power broker between these 2020 hopefuls and the people who they want to vote for him. Partly that’s because he has a pretty crystallized liberal base and he’s been pretty outspoken in his own criticism against Trump, and that’s worked well for his audience.

Specifically citing Gillibrand’s appearance, the reporter noted: “So especially for people like Gillibrand, who’ve been outspoken in her criticism against the President, it seems like it’s an interesting place for her to start, and a lot of these candidates.”

“We’ve seen, Kamala [Harris] there, we’ve seen Cory Booker there in recent months. So people who we suspect might become 2020 hopefuls are using the so-called Colbert primary ahead of Iowa, and even ahead of New Hampshire,” Radford concluded.

During his chat with “Kamala” – as Radford referred to the California Democratic Senator – Colbert embarrassingly asked: “What makes you happy? Where does your hope come from?”

Rather than criticize Democrats for going on Colbert to avoid tough questions, the media seem pleased that the liberal host is providing a friendly forum for the would-be presidential contenders.