“President Trump confronts the heartbreak and anger of grieving parents,” co-host George Stephanopoulos announced at the top of GMA. During a later report, Chief White House Correspondent Jon Karl described: “President Trump sat silently as one after another students and parents of shooting victims pleaded for action.”

While several clips ran of Pollack’s remarks, none of them included this statement:

And it stops, we all work together and come up with the right idea and it’s school safety. It’s not about gun laws right now. That’s another fight, another battle. Let’s fix the schools and then you guys can battle it out whatever you want. But we need our children safe.

On NBC’s Today, White House Correspondent Kristen Welker emphasized: “Earlier Wednesday, at the White House, more painful pleas to President Trump directly. Andrew Pollack’s daughter, Meadow, was among the 17 killed in Florida.” It was followed by Pollack imploring: “Should have been one school shooting and we should have fixed it! And I’m pissed! Because my daughter I’m not going to see again.”

At the top of the 7:30 a.m. ET half hour, co-host Savannah Guthrie even misrepresented the grieving father’s position. “Lawmakers from Florida to the White House faced families impacted by gun violence, including the most recent school shooting in Florida, as they demand swift action to change our nation’s gun laws.” A soundbite ran of Pollack, despite him specifically not wanting to focus on enacting new gun laws.

Thursday’s CBS This Morning also featured Pollack’s comments throughout the show, however, unlike ABC and NBC, at the top of the 8:00 a.m. ET hour, co-host John Dickerson briefly clarified: “Pollack said the government needs to address school safety first, not gun laws.” At least there was some effort to accurately represent Pollack’s views, even if it was an afterthought.

Ironically, after Pollack spoke, one of his sons called for a “free flow of ideas” on the issue and that “Censorship has got to stop and that’s how we find the solutions, by listening to everyone.”

If only the media could heed that request.

Read the full transcript of Andrew Pollack’s February 21 remarks below:

ANDREW POLLACK: We’re here because my daughter has no voice. She was murdered last week and she was taken from us. Shot nine times on the third floor. We, as a country, failed our children. This shouldn’t happen. We go to the airport, I can’t get on a plane with a bottle of water, but we leave it – some animal could walk into a school and shoot our children. It’s just not right and we need to come together as a country and work on what’s important.

And that’s protecting our children in the schools. That’s the only thing that matters right now. Everyone has to come together and not think about different laws. We have to come together as a country, not different parties, and figure out how we protect the schools. It’s simple. It’s not difficult. We protect airports. We protect concerts, stadiums, embassies. The Department of Education that I walked in today that has a security guard in the elevator. How do you think that makes me feel? In the elevator they’ve got a security guard.

I’m very angry that this happened because it keeps happening. 9/11 happened once and they fixed everything. How many schools, how many children have to get shot? It stops here with this administration and me. I’m not gonna – I’m not gonna sleep until it's fixed. And, Mr. President, we’re gonna fix it because I’m gonna fix it. I’m not gonna rest.

And, look, my boys need to live with this. I want to see everyone, you guys look at this. Me, I’m a man, but to see your children go through this, buried their sister. So we – that’s why I keep saying this, because I want it to sink in, not forget about this. We can’t forget about it. These – all the school shootings, it doesn’t make sense. Fix it. Should have been one school shooting and we should have fixed it! And I’m pissed! Because my daughter I’m not going to see again. She’s not here! She’s not here. She’s in North Lauderdale at, whatever it is, King David Cemetery. That’s where I go to see my kid now. 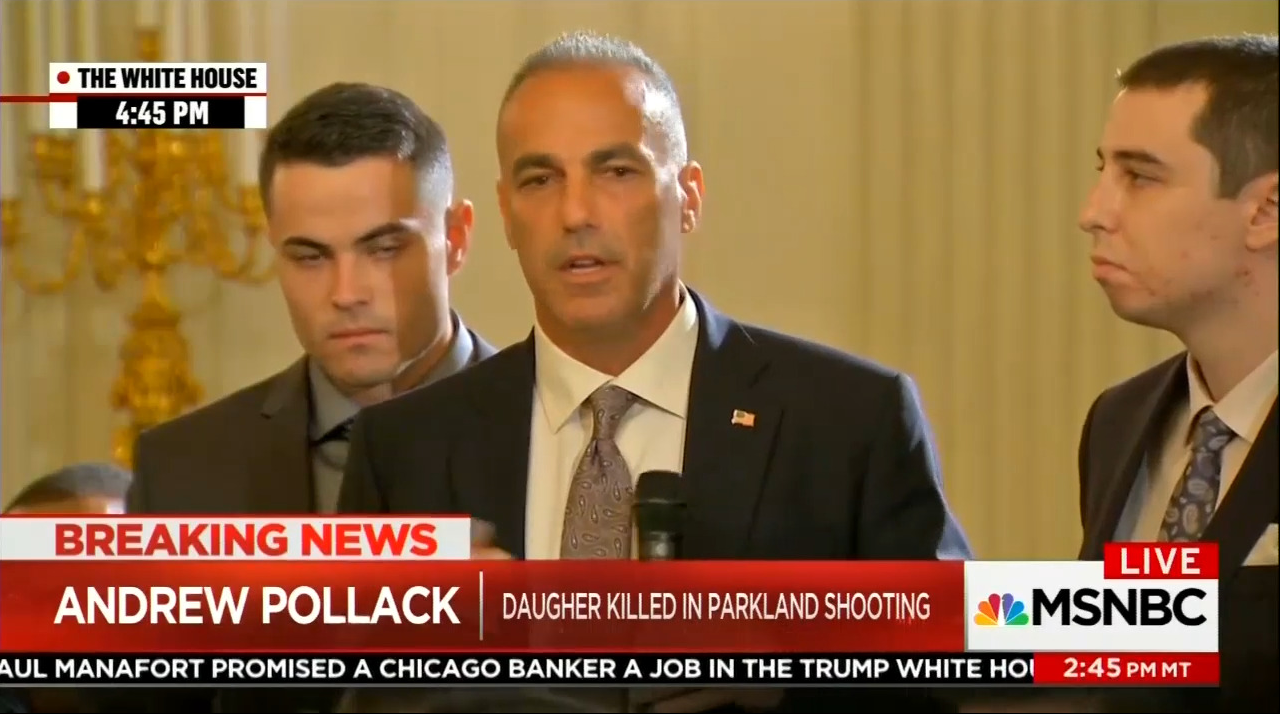 And it stops, we all work together and come up with the right idea and it’s school safety. It’s not about gun laws right now. That’s another fight, another battle. Let’s fix the schools and then you guys can battle it out whatever you want. But we need our children safe.

Monday, tomorrow, whatever day it is, your kids are going to go to school. You think everyone’s kids are safe? I didn’t think it was gonna happen to me. If I knew that, I would have been at the school every day if I knew it was that dangerous.

It’s enough. Get together, work with the President and fix the schools. That’s it. No other discussions. Security, whatever we have to do, get the right people, the consultants, these are our commodities.

POLLACK: I just want to add that it’s imperative to the safety of everyone to support free market and free flow of ideas and listen to people on – listen to radical opinions on both sides and that’s how we’ll find solutions. You let people battle it out in a free flow of ideas. Censorship has got to stop and that’s how we find the solutions, by listening to everyone. Having an open mind.

ANDREW POLLACK: This is my son hunter.

HUNTER POLLACK: How are you, I’m Hunter Pollack, class of ’15, Marjory Stoneman Douglas. I walked the same hallways where Meadow got shot, and all 16 other victims. First off, I want to thank Mr. President for having us. We had a very effective meeting before we walked in this room. Mr. Vice President as well, and Madam Secretary. I put all my trust in them and my father that together we’ll be able to find a solution. And that’s all I have to say. Thank you for having us.