At the top of Wednesday’s NBC Today, co-host Matt Lauer described how Univision anchor Jorge Ramos was “kicked out of a Donald Trump news conference” on Tuesday and wondered: “Can Trump’s confrontational style carry him all the way to the White House or will it wear thin with voters?”

In a report that followed moments later, correspondent Peter Alexander touted the incident as “quite the spectacle,” telling viewers: “You decide, was Trump was out of line? Was the anchorman grandstanding?” Alexander then proclaimed: “To be clear, Jorge Ramos is the most powerful newsman in Spanish-language TV. He's often called the Walter Cronkite of Latino America.”

Long clips ran of the contentious exchange between Trump and Ramos, with Alexander noting: “A combative Donald Trump confronted by Univision anchor Jorge Ramos about Trump’s controversial comments on immigration.”

Alexander did acknowledge: “Ramos has been a fierce critic of Trump’s, recently accusing him of spreading hate” A soundbite ran of Ramos declaring: “Right now Donald Trump is no question the loudest voice of intolerance, hatred, and division in the United States.”

Wrapping up the segment, Alexander touted: “...this morning the National Association of Hispanic Journalists is condemning Trump for, in their words, ‘allowing Ramos so be ejected simply for asking a question.’”

In an interview with Trump after Alexander’s report, Lauer asked:

Jorge Ramos has been an outspoken critic of your immigration policy. We can debate at length whether he should have waited his turn to ask that question, but you did tell him to sit down repeatedly and then threw in a "Go back to Univision" for good measure. Do feuds like this, Donald, work for you? Do you think this help you with your supporters?

I will tell you, he was totally out of line last night. I was asking and being asked a question from another reporter. I would have gotten to him very quickly. And he stood up and started ranting and raving like a madman. And frankly, he was out of line....He was totally, absolutely out of line.

Ramos appeared on both ABC's Good Morning America and CBS This Morning on Wednesday. He told GMA co-host George Stephanopoulos: "We have to denounce that he wants to deny citizenship to children being born here....I think the best journalism happens when you take a stand...We are not only required, but we are forced to take a stand."

Here is a portion of Alexander’s August 26 report: 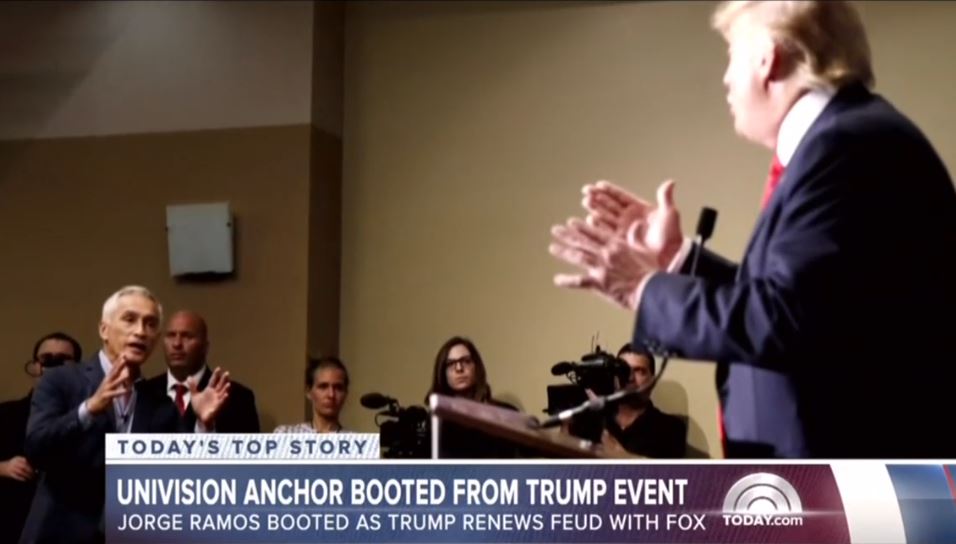 We’ll also get into things on the Democratic side, a possible run by Vice President Joe Biden. Is that why Hillary Clinton has cut her vacation short? We'll have the story.

PETER ALEXANDER: Savannah, good morning to you. This was quite the spectacle. You decide, was Trump was out of line? Was the anchorman grandstanding? To be clear, Jorge Ramos is the most powerful newsman in Spanish-language TV. He's often called the Walter Cronkite of Latino America. And he only recently said he takes Trump’s comments on immigration personally. Well, last night, the two men squared off.

In Iowa Tuesday night, more fireworks and another feud.

DONALD TRUMP: Excuse me. Sit down. You weren't called. Sit down.

JORGE RAMOS: No, no.

RAMOS: I have the right to ask a question.

TRUMP: No, you don’t. You haven't been called.

RAMOS: I have the right to ask a question.

TRUMP: Go back to Univision.

ALEXANDER: The anchor escorted out of the room, insisting he has a right to ask a question. Ramos has been a fierce critic of Trump’s, recently accusing him of spreading hate.

RAMOS: Right now Donald Trump is no question the loudest voice of intolerance, hatred, and division in the United States.

ALEXANDER: Ramos was later let back in, where the two men sparred at length on immigration.

TRUMP: No, no. I’m going to do it in a very humane fashion, believe me.

ALEXANDER: And that wall Trump has proposed to build.

ALEXANDER: At times, things got personal.

TRUMP: Do you know the number? And you know you're a part of the lawsuit. How much am I suing Univision for? It’s $500 million. Believe me, I have a bigger heart than you do. Okay, he's an honest guy. Now I like him.