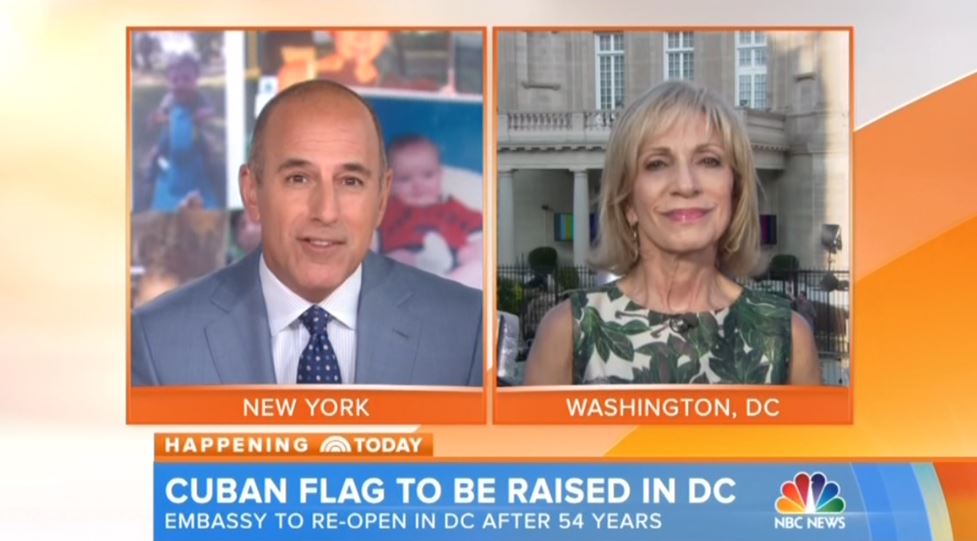 On Monday, hosts and reporters on the NBC, ABC, and CBS morning shows could hardly contain their excitement as they cheered an “historic new era” in relations between the United States and Cuba. On NBC’s Today, co-host Matt Lauer touted: “Overnight, for the first time in five decades, full diplomatic ties were officially restored. That paves the way for the reopening of embassies in Washington and Havana.”

In the report that followed, Chief foreign affairs correspondent Andrea Mitchell gushed: “History was already made earlier this morning when overnight Cuba's flag was hung in the lobby of the State Department for the first time. This day has been long in coming.”

On ABC’s Good Morning America, co-host Robin Roberts declared “an historic day for U.S. and Cuba relations” as news anchor Amy Robach announced: “It is a new day for both countries after more than half a century, Cuba and the United States have officially restored diplomatic relations.”

Correspondent Jim Avila enthused: “It's a day 54 years in the making. Cuba and the United States ending five decades of insults, plots, and spy games....And later today, on a new flag pole planted behind me last month as Cubans sang their national anthem, the new ambassador will bring out the new flag here and Cuba's foreign minister will raise it for the first time on American soil since 1961.” 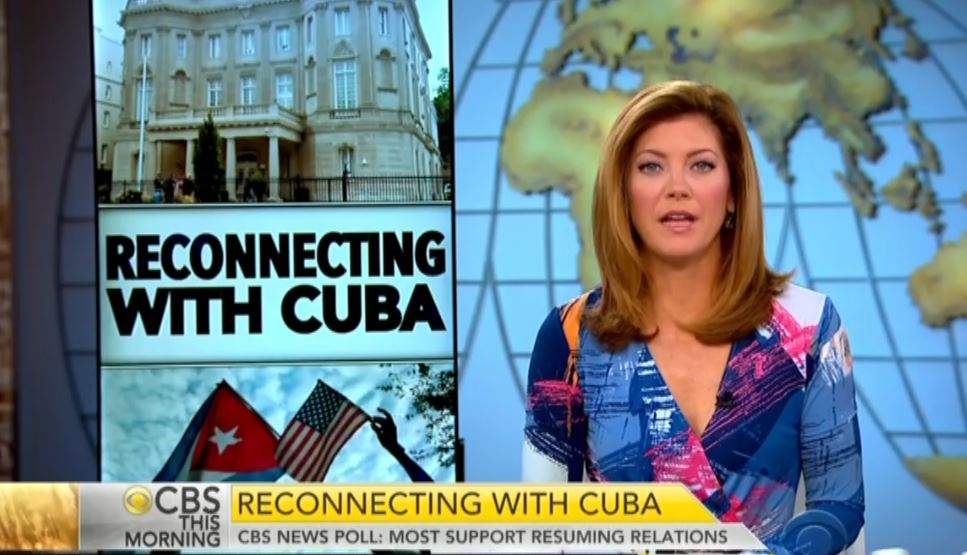 On CBS This Morning, co-host Norah O’Donnell identically proclaimed: “This morning marks an historic change in U.S. relations with Cuba. The Cuban flag will be raised over its embassy in Washington for the first time since 1961.” She also touted poll numbers favoring the move: “58% of Americans in a new CBS News poll favor re-establishing diplomatic ties. 54% say they support an end to the trade embargo.”

Correspondent Margaret Brennan hailed the development: “As of midnight, the U.S. now has diplomatic relations with Cuba for the first time in 54 years. Top Cuban officials are in the embassy behind me and they plan to raise the red and blue Cuban flag later today, taking a symbolic and a historic step.”

She further heralded the upcoming ceremony: “A Cold War standoff fades into history today when the Cuban flag is raised once again over the long-shuttered Cuban embassy just blocks from the White House.... President Obama said it was time to cool the past half century of tension.”

This Morning was the only show to actually briefly note Cuba’s transgressions and abuses:

It started after the Cuban revolution brought Fidel Castro to power in 1959. His Cold War alliance with the Soviet Union alarmed the U.S., which quickly shuttered its embassy in Havana and tried to remove Castro, even sponsoring a failed invasion known as the Bay of Pigs. That nearly sparked full-scale war after Russia began storing nuclear missiles in Cuba. That deep history of mistrust is what makes restarting relations so significant....But there's more work to do. The Castros remain in power, Cuba is still Communist, and cracking down on dissidents.

However, beyond those mere seconds, the rest of the segment applauded the effort. A soundbite was featured of Cuba scholar Julia Sweig heaping praise: “This is a moment of magnificent historical significance and we the two countries, the United States and Cuba, have been through many ups and downs. This is undoubtedly a significant up.”

The CBS morning show recently acted as the Cuban board of tourism, touting Carnival cruises to the island.