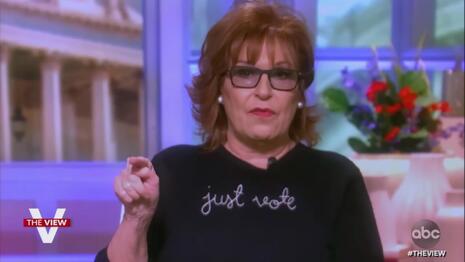 Instead of condemning left-wing violence, the media has spent the last several months normalizing it. If that wasn’t bad enough, now they are mocking anyone who takes measures to protect themselves from violence. That’s what happened on The View today as co-host Joy Behar mocked President Trump as a “chicken” who was hiding because the White House put up an additional non-scalable fence to protect those inside from left-wing rioters tonight, as election results come in.

After complaining about how supposedly difficult it is to vote on election day, Behar attacked Trump as a coward who was "scared" of “what’s going to come in.” She also boasted how “courageous” President Obama felt safe from attacks when he was re-elected:

Also, the other thing I've been noticing is he's made America proud again. I'm not proud of a president who has to build a wall around the White House because President bone spurs is too scared to go out or what's going to come in. President Obama, the first black president that we've ever had in this country -- we know about these racists out there -- he never had a wall. He never had to build a wall. Because he was courageous. This guy is just a big old chicken. Anyway, that's where I'm at today. [ Clucks like a chicken ]

Gee, Joy, I wonder why Obama didn’t have to worry about conservatives rioting after he was elected, twice. Doesn’t that prove the point that this country isn’t full of violent right-wing racists?

Later on, Behar and her co-hosts agreed that right-wing crazies would be emboldened by President Trump to lash out if he loses:

WHOOPI GOLDBERG: Now I know that if it goes in a crazy way and Joe doesn't get elected, he's going to say to people everybody calm down. You know, We'll figure this out. You think the other one -- you think you know who will do the same if his people start going off and being crazy? Think he'll say to them calm down?

Behar then claimed “petrified” Trump was “barricading” himself in the White house because he’s “going to jail” before demanding her left-wing cohorts “take down” the Trump administration or lose the country:

No. First of all, we have to remember -- people have to remember Trump is hanging on to power. Primarily, I think, it's to avoid going to prison. People don't remember Watergate. John Ehrlichman,Haldeman they both went to prison.. John Mitchell went to prison. The only reason Nixon didn't go is because he was pardoned by Gerald Ford. They will go to jail. He will go to jail. He has to answer E. Jean Carroll. He has to answer the southern district. That's why he’s petrified. That's why he's barricading himself. It’s not just about holding onto power. Those other three stooges you were just talking about, maybe they'll get voted out eventually because they have no core of self. Cruz -- I love what you said yesterday about Rubio, Ana, fantastic. These people have to be taken down immediately. We will never have a country---I’m sorry Sarah, I’m not as positive about it as you are.

The View covering for violent leftists was paid for by advertisers CarShield and Advil. Contact them at the Conservatives Fight Back page.