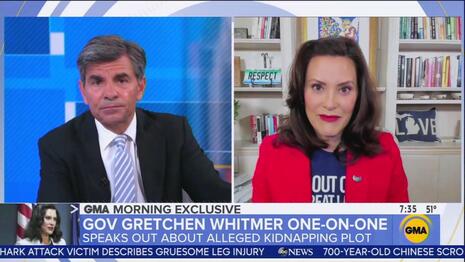 After the FBI arrested 13 people involved in an anarchist terror plot to kidnap Michigan Governor Gretchen Whitmer yesterday, she and the state's attorney general predictably blamed President Trump and the media ran with this narrative. Friday on Good Morning America, George Stephanopoulos spoke with Whitmer and spent nearly the entire time encouraging her to attack President Trump as “complicit."

After asking Whitmer how she was doing, Stephanopoulos immediately went to blaming the president:

…. I'm sure you saw President Trump on Fox News and on Twitter last night says you're doing a terrible job and owe him a thank you. Your response?

….What should the president be saying right now?

….You've said the president is complicit with the extremists.

But Stephanopoulos didn't bring up facts that contradict this narrative. One of the ringleaders of this failed, insane operation admitted he “hates” “tyrant” Trump. Sure doesn’t sound like a right-winger who takes marching orders from the president:

Whitmer blames that plot to kidnap her on Trump. Here's one of the group's ringleaders saying he hates Trump. https://t.co/q1UK8Ei1Hu pic.twitter.com/RNqiKRqD6A

Instead, ABC let Whitmer make a Joe Biden commercial, repeatedly using the attack to campaign for the Democrat (click "expand"):

….Well, anyone who gives safe harbor to or encouragement to is complicit and that's precisely what he did on the national stage in the middle of a presidential debate when he said, stand by. That was his message. It wasn't one of rebuke. It was one of rallying cry and I think that's the dangerous part of this moment. Each time he has tweeted about me, each time that he has said liberate Michigan and said, I should negotiate with the very people who are arrested because they're good people, that incites more domestic terror and I'm not the only governor going through this. Certainly it's been worse for me than most, but it is not unique to me. It is not even unique to Democrats. This White House has a duty to call it out and they won't do it, in fact, they encourage it and that's why as a country we have a choice between an incredibly decent human being in Joe Biden and what we've seen the last four years. We need someone who can unify us. We need someone who can lead us through these tumultuous times and find common ground and that's why I'm proud to support Joe Biden and that's why these stakes are not just personal to me but to every one of us.

After asking if she was “still under threat,” with the last question, Whitmer again blamed President Trump for stoking violence:

Actually, George, since he first called me ‘that woman from Michigan,’ we saw an increase in hateful language and social media and I think that it's incumbent on all of us to bear responsibility. Social media. The press. Our leaders to have platforms and so there's ongoing rhetoric even the president last night in this tweet storm won't stop attacking me and I think that it's creating a very dangerous situation, not just for me but for people in leadership roles who are trying to save lives all across this country.

Nor has the media repeatedly asked Joe Biden and Kamala Harris to condemn the rampant violence from left-wing Antifa and Black Lives Matter.

ABC turning a domestic terror plot into a Joe Biden commercial was paid for by advertisers Starbucks and Crest.