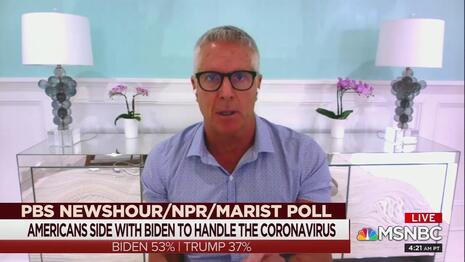 MSNBC has displayed their hatred for Trump's base before. But Donny Deutsch’s rant on Friday’s Morning Joe really takes the cake.

It all started with co-host Mika Brzezinski having a major meltdown over a NPR/PBS/Marist poll showing ⅓ of Americans trusted President Trump “a great deal” in giving on coronavirus information. “It's almost as if he's purposefully trying to botch the response to this pandemic and yet a third, a third of the people who responded to the poll believe him?” she ranted.

The co-host pleaded with regular Morning Joe commentator, Donny Deutsch to tell her how ⅓ of Americans could trust what Trump says on coronavirus:

“What I want to understand is who is the one-third. I really -- Donny, help me out here. I'm dead serious. I really, truly believe we're at a breaking point in this country!” she said, voice breaking.

After the rest of the panel broadened the results of this poll to claim that 1/3 of Americans implicitly trust Trump on anything he says, Deutsch got around to answering her question:

Well, MSNBCers did call Trump’s base sadists and declare Hillary Clinton “dead on” about President Trump’s base being full of “deplorables,” so it seems this election season it’s their turn to be the ones shaming Trump voters.

Deutsch ended his rant insisting journalists would be the victims if Trump won:

“You are right, Mika, people like you, like me, like Gene Robinson could end up in jail and certainly we want to stay away from Fifth Avenue,” he fretted.

If you don't think it's acceptable for a so-called journalist to be calling 1 in 3 Americans, racists, on national television tell Morning Joe's advertisers here.

MIKA BRZEZINSKI: Donny Deutsch, to this point, Mike Pence, Pompeo, McConnell, you name them, are they under a spell? I get it, I'm sorry their team is losing terribly. It should be obvious to them, these are not stupid men, I believe Pompeo went to West Point -- he went to West Point! Really? That's right there, something I'm going to have to take pause and think about, because the way this president is behaving right now is anything but patriotic. Is anything but helping this country's national security. Is anything but shoring up the strength of this country. So for someone from West Point not being able to speak out -- I'm sorry your team is losing but I'm just wondering why can't these men, at least talk about the sanctity of our elections, talk about how the post office needs to be protected during a pandemic when people need their medicines. Are they under a spell? What explains this?

DEUTSCH: As far as your other question about Pompeo and the other people, they are cowards. The only thing we can do in the press is visually do not let the parade go on. Any time you are interviewing any Republican about anything, you start with the post office, if we don't get that right and we get four more years of Trump, you are right, Mika, people like you, like me, like Gene Robinson could end up in jail and certainly we want to stay away from Fifth Avenue.

BRZEZINSKI: And you have to wait for us to ask, Republicans? You have to wait for us to ask? What are you going to do walk by and put your masks on, if you're wearing them, and I'm sorry I have to get to a lunch. I’m sorry I can’t==You can't talk about this? You can't talk about this, there's something wrong with you! You need to look in the mirror and think about what you really care about beyond your money, beyond your access to power, beyond this moment. Think about what we are supposed to be and please speak out.