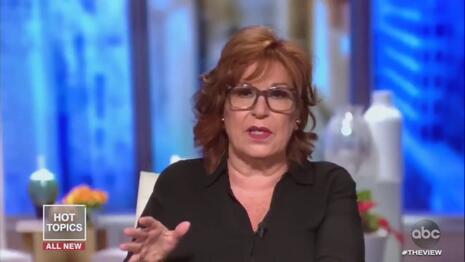 The View hosts had mixed reactions to yesterday’s embarrassing and seemingly pointless hearing where Democrats beclowned themselves scolding instead of questioning Attorney General William Barr. While co-host Sara Haines admitted she was disappointed by the “bickering” and interrupting from [Democrat] representatives, fellow host Joy Behar seemed to be living in another reality, saying their shockingly bad performances pleased her.

After Sunny Hostin complained about Barr’s factual comments on police shootings and black on black homicides, Joy Behar also ripped Barr while praising Democrats for doing a “good job.” She actually argued that Democrats couldn’t allow Barr to talk because he wouldn’t answer the questions, a self-fulfilling prophecy!

The View host went on a tirade about President Trump being an egregious liar and autocrat for saying the press is fake news. But so was Barr...for telling Rep. Eric Swalwell that he didn’t read every one of Trump’s tweets:

BEHAR: I think that's what they were doing, but to me, you know, I have been saying for three years now that the major sin that Trump has committed is the lying, the lying, the lying, and more lying, and also, you know, saying that the press is fake news. All of that is very egregious, and it's right out of an autocrat's playbook to tell people that what they see is not the truth. Believe me or believe your eyes. And Trump has that, and now I noticed that Barr is also a liar just like his boss. For example, just one example, he said that he does not read Trump's tweets. Now that is a blatant lie. It's a blatant lie. Around February he said, Barr told ABC news that he wants Trump to stop tweeting and that the president's comments make it impossible to do his job. Well, if he doesn't read them, why is he so bent out of shape? And he's just lying, and so, you know, there were other things that went on yesterday, but to me, that is the major problem with this administration. They are liars, OK?

WHOOPI: Well, yes they are.

Newsflash to Behar: It is actually possible to be aware of certain tweets by the president without following his Twitter account because the media talks about his tweets that they don’t like, ad nauseam.

This ludicrous defense for Democrats was brought to you by sponsors Progressive and L’Oreal. You can contact them here.