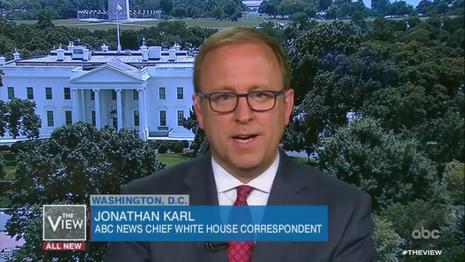 On ABC’s The View today, ABC’s Chief White House Correspondent Jonathan Karl actually had the audacity to complain that the Trump administration had made White House press briefings too political under press secretary, Kayleigh McEnany. Naturally he didn’t put any fault on White House reporters constantly asking hyper partisan, loaded questions that sounded like they came straight from the DNC playbook.

From the get-go, co-host Whoopi Goldberg hyped how President Trump had turned a recent press briefing into a “campaign rally.”

“Have you ever, ever seen anything like this before, or are we just forgetting stuff?” she gushed. Karl added to the hyperbole, calling it “unbelievable” and that he’s never seen before “such blatant politics conducted out of the Rose Garden.”

Later on he was given another opportunity by Whoopi to whine about the briefings again, referencing his own Washington Post op-ed attacking McEnany. He complained that the press secretary had turned the briefing into a “political event” and had “vilified the press” while not “really [giving] much information:”

WHOOPI: So your tenure as President of the White House Correspondents' Association has ended, and you've worked with 14 different press secretaries in all different administrations. You just wrote also an op-ed on this for The Washington Post.  What do you say in the op-ed that we should know?

KARL: Well, I'm concerned that the White House briefings have become political events. I have maybe a naive old-fashioned notion that the White House secretary is a public servant paid for by the taxpayers, and the job is to provide information about what the president is doing and what the executive branch is doing, but not to be a political spokesperson. You are not the spokesperson for a campaign or a political party. You do represent the president's views to the press, but you are also -- you have a duty to inform the American people through the press which most people get most of their information from, and these -- these press conferences have become an effort to vilify the press, to try to discredit the press, and not to really give much information, but to give a political message of the day, and I, you know, wouldn't normally pick a fight with a White House Press Secretary, but, you know, except on an issue I'm asking about in a briefing, but this concerns me not so much from what's happening now, but I hope this doesn't become the way going forward. We have to get back to the notion that the White House press secretary is ultimately a public servant and not a political spokesperson.

WHOOPI: Well, I suspect that that won't happen until we can remind the guy in the White House that he works for us. Once he gets that through his head, maybe he can pass it down to everybody else who's working with him.

In that op-ed he also wrote this scathing condemnation of McEnany: “Denying reality and using the White House podium for purely political purposes is a violation of public trust.”

The “reality” is that these briefings often turn into a politicized precisely because of the politically-charged, partisan questions the White House correspondents themselves ask. But instead of letting the administration be steam-rolled by these constant attacks, McEnany fights back.

ABC’s The View, doing the work of the DNC, was brought to you by Swiffer and Carvana. You can find their contact information linked above.