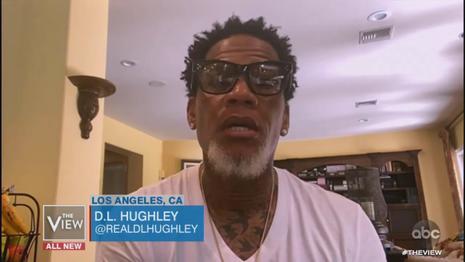 Comedian D.L. Hughley stopped by The View briefly Friday to promote his book, “Surrender, White People!: Our Unconditional Terms for Peace,” and with a title like that, you can guess where the interview would be headed. But while Hughley had harsh words for whites, he, like many in the media, went soft went it came to actor and TV host Nick Cannon, after he made wildly racist, anti-Semitic comments on his YouTube channel.

Co-host Meghan McCain asked Hughley what his “take” was, on CBSViacom firing Cannon over the anti-Semitic part of his objectionable rant.

Hughley said CBS firing Cannon didn't help us "understand each other" and our country would be better if we had an “open dialogue” about what Cannon said. Hughley also downplayed the vile, racist comments as simply, “problematic:”

MCCAIN: We have been talking about anti-Semitism as well that was sparked by the CBS Viacom firing of Nick Cannon for his anti-Semitic comments he made. He has since issued an apology. We want to know your take on what happened.

HUGHLEY: I think we learned a lot in that instance too. I think if we learned --if uh-- it depends on what our goals are. Is our goal to make ourselves a more, better society, one that can have open dialogue? Or is it one to be punitive? I think what Nick said was problematic, but I think one of the ways you deal with somebody who says problematic things is make them have to explain what they meant. Sometimes holding things up to the light of day, they crumble under truth. But I think when I was a kid, me and somebody would have a fight, and the teacher would make us apologize, but the reasons we fought were still the same. I think one of the things that’s happening, If you have a bunch of Karens who lose their job, eventually you're going to have a Nick that loses their job, and I think that doesn't make us a better society, and it doesn't -- it doesn't take away what they feel. It takes away what they say. So I think we’ve learned a lot about what not to say, what not to feel, and not to have dialogue that makes us better and understand each other.

The problem here is Hughley talks about Cannon’s comments and CBS’s response as if it was a liberal and a conservative disagreeing on a political issue, rather than what it was, an actor bragging about how he views whites and Jews as “less than” blacks and “closer to animals.” What exactly are we supposed to learn and "understand" from someone who makes comments like that?

Not to mention that due to Cannon’s liberal privilege, he will still continue to host Fox’s The Masked Singer. Celebrities besides Hughley came out to defend Cannon’s comments, some even sharing their own anti-Semitic comments.

Meanwhile, Hughley showed how he's fine with saying racist, bigoted comments if they're directed at Trump supporters. Hughley sneered that Kanye West was “an honorary white guy” now, with some other nasty insults. He has previously said you “can’t be a black Trump supporter and be humane.”  Doesn't really sound like he's "open to having a dialogue" with any black conservatives.

The hateful comedian also seemed to support statues of American historical figures and our Founding Fathers being toppled by a leftist mob. He declared, “We build statues to men whose only credit for getting a statue was being horribly violent to black people."

This segment displaying the left’s privilege was brought to you by Swiffer and Carvana. You can find their contact information linked above.