CNN misrepresented a Gallup poll’s results yesterday in an effort to bolster their dishonest narrative that most Americans would support a potentially years-long national lockdown. On Wednesday the network tweeted out a headline claiming that 68% of Americans said a vaccine was "needed" before “returning to normal.” Vaccines can take years to develop so 2/3 of Americans willing to wait years before reopening the economy would be quite a shocking finding. However that suggestion was quickly debunked by the own data CNN was referencing.

On Wednesday the network tweeted, “68% of Americans say a coronavirus vaccine is needed before returning to normal life, a new survey finds, [emphasis mine].”

The tweet linked to this story, which used the same words in its headline, claiming two Gallup surveys found a majority of Americans were depending on a vaccine to return to normal.

The original story didn’t even link to which Gallup surveys they were referring to. After some sleuthing, critics like Professor Nicholas Grossman writing for Arcdigital found the poll in question, but Gallup’s wording was not exactly how CNN presented the findings. In fact, Grossman called it an "egregious misreading of the data."

According to the Gallup survey from April 27-May 3, "targeted quarantine" for positive COVID-19 patients topped Americans' list of factors that would determine their "willingness to return to their normal activities." In the same survey, 68% of Americans said the “availability of a vaccine to prevent coronavirus” also ranked as a “very important” factor in their “willingness to return to normal activities.” 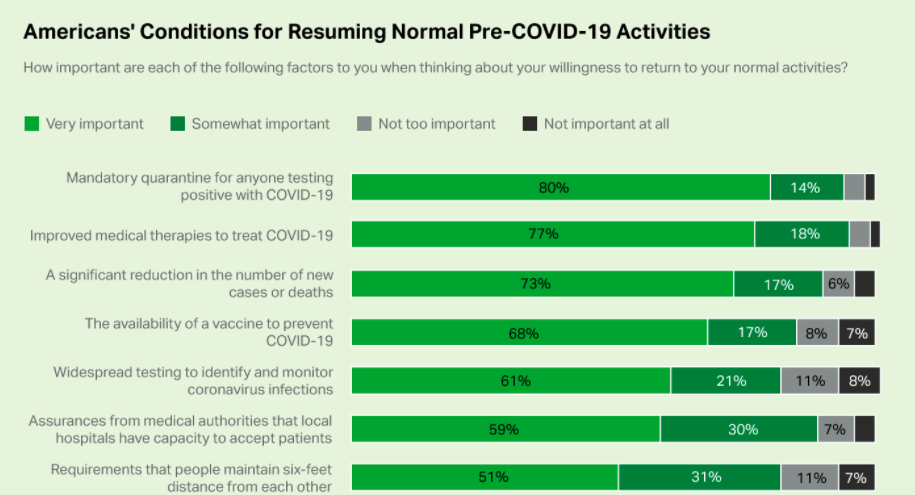 So what exactly are “normal activities?” Gallup and CNN don’t say. This could of course vary wildly from person-to-person. In fact another poll from Gallup conducted the same week showed quite the opposite of CNN's claim; namely, that only 9 percent of Americans would wait for a vaccine to return to their daily activities if they were no government restrictions.

More importantly, the survey doesn’t say that ⅔ of Americans "need" a vaccine before resuming normal activities, as CNN originally put it.

After getting backlash for the tweet and the matching misleading headline, the tweet was deleted and CNN offered this “clarification” at the bottom of the story:

CLARIFICATION: The headline on this post was updated to clarify that the survey found 68% of Americans say an available vaccine is very important before returning to normal life. The post was also clarified to emphasize that respondents were rating the importance of each benchmark to their willingness to return to regular activities.

Further showcasing how credible they are, the network also touted their own poll showing they are more trusted than Fox News, this week. Reliable Sources host Brian Stelter patted himself on the back, touting the “striking” numbers.