Huntsman Grills Schiff: Why Couldn’t Biden Be Called as Witness for Impeachment? 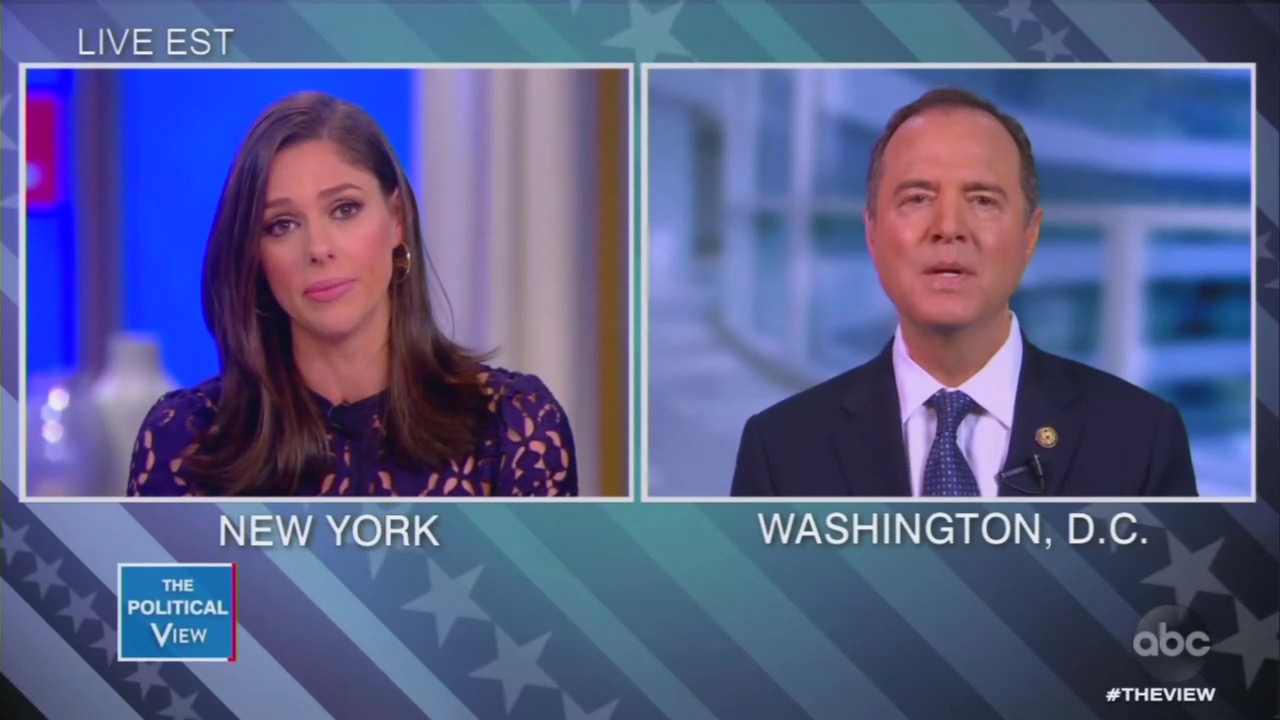 On her last week on the show, The View co-host Abby Huntsman held Democrat Adam Schiff’s feet to the fire over which impeachment witnesses were allowed to testify, asking him repeatedly to explain why Joe Biden and his son, Hunter, couldn’t be subpoenaed. Her co-host Meghan McCain also pressed the Democrat to admit that this impeachment process was going to damage his party with the American public.

As Schiff faced friendly questions from the more liberal hosts on Monday's show, Huntsman pressed the Democrat to answer why in a “fair trial” Republicans couldn’t call Joe Biden, Hunter Biden, or even himself forward as witnesses:

I actually have a question on the witnesses that we've been talking about. Do you worry that if you open the door to witnesses like John Bolton that Republicans -- we're talking about a fair trial -- Republicans are going to call the Bidens, even you to testify. Trump re-upped his calls for you and for speaker Nancy Pelosi over the weekend, he was tweeting all about that. Joe Biden has said that he would not testify, then he said he would testify. Would you if asked be willing to testify if you were subpoenaed?

Schiff immediately backed away from the question, saying he nor Pelosi were “fact witnesses.” Huntsman kept pressing though, asking, “If it is a fair trial though you could very well see a case where the Bidens would have to be there. Do you think that's a good thing politically or for impeachment as a whole?”

As Joy Behar grumbled and scoffed in the background, Schiff also tried to take focus off the Bidens. He answered, “I think what the senators would have to evaluate is do the Bidens have any relevant testimony, and I think the answer is that they don't…. There's not much light that Joe Biden or Hunter Biden could shed on the president's conduct.”

Huntsman still didn’t relent, demanding again for Schiff to give a better answer. “Then why not have them show up and just say, if you have nothing to hide, then come out there and tell the American people that because they want to hear both sides of it?” she asked.

A peeved Schiff had it at this point and responded with the Democrats' kneejerk reaction that this was a “Russian propaganda talking point.”

He defended the hypocrisy by saying that having Biden testify would turn the Senate trial "into the same kind of a sham proceeding that the president sought to have Ukraine undertake.”

Huntsman’s co-host Meghan McCain also had tough questions for Schiff before this.

She attempted to get him to admit that impeachment would backfire on Democrats, politically, asking, “Do you think just purely political was this a good political move for Democrats, and is there any indication that this has damaged President Trump? Because poll numbers say that it hasn't.”

Schiff pathetically boasted that past polls showed growing support behind the impeachment investigation, as evidence that the public would turn on Trump. As he kept harping about the “Constitutional duty” for impeachment, McCain tried once more repeating her question. Alas, that just gave Schiff more time to argue 2020 Democrat Senators were more concerned about protecting the Constitution than campaigning.