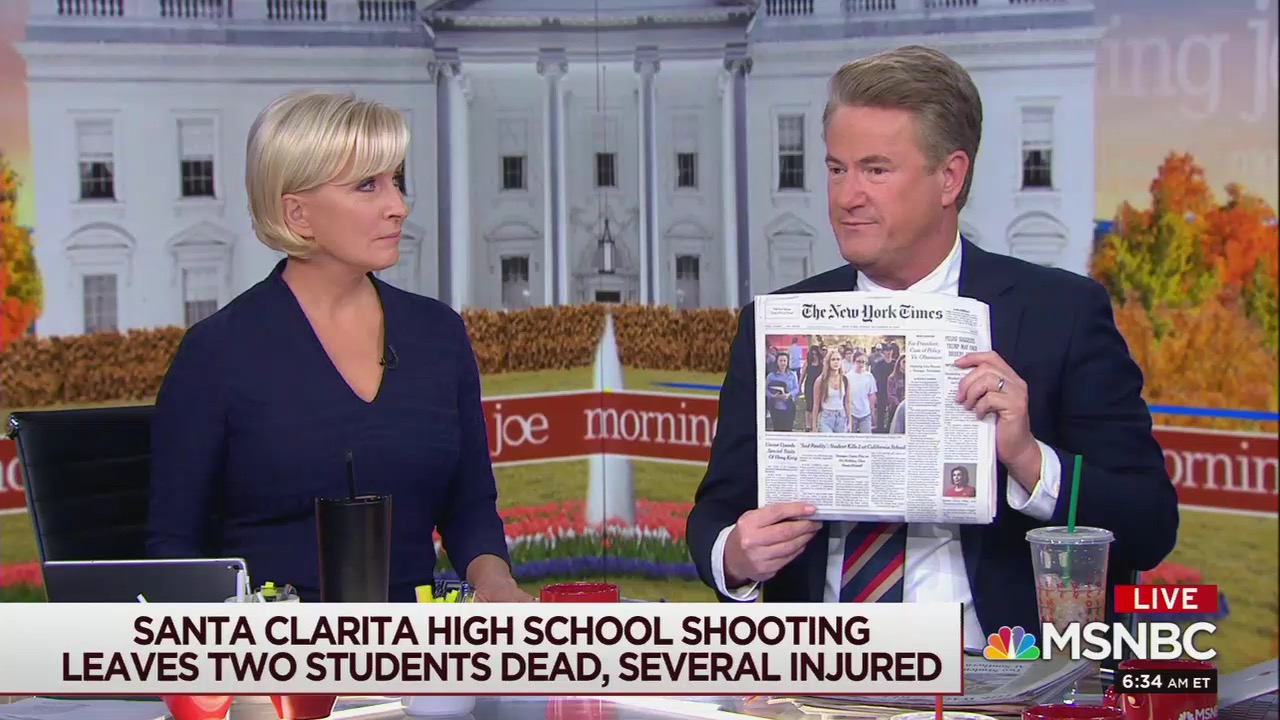 On MSNBC’s Morning Joe Friday, the liberal hosts and their guests’ engaged in their typical knee jerk reaction to a senseless act of violence, by immediately blaming Republicans for the tragedy.

After two students were shot and killed by a fellow student at a California high school Thursday, co-host Joe Scarborough claimed there was an “epidemic” of kids walking into gun stores, buying AR-15s, and shooting up their schools. Not only that, but Republicans were so motivated by politics, they didn't care if kids got killed, unless the shooter was a Muslim:

If it had been a Muslim that had shot two American kids, Washington would be shut down today. Remember San Bernardino? Remember, remember--- Washington got shut down. But, Jason, if it's -- if it's this random domestic terrorism with kids being able to walk into gun stores and get AR-15s and shoot up their schools, not necessarily this school, I don't know what weapons were used here, but at a majority of the school shootings as this epidemic spreads across America, Republicans say absolutely nothing. If one Muslim kills one or two Americans and, you know, says akba or Allah, then suddenly Washington shuts down. These Republicans actually are prioritizing death. Some deaths are more disturbing than others. But when it's just our kids getting shot in school, unless a Muslim did it, they just don't do anything.

Nevermind that a majority of these school shootings across the country are done by kids too young to legally buy a gun. Nevermind that California has some of the strictest gun laws in the country, yet is still plagued by mass shootings.

His guest, MSNBC contributor Jason Johnson, also blasted the right as “disgusting” racist bigots who are “in love” with their guns at the expense of children’s safety:

Look, unfortunately it's bad enough that the Republicans only seem to care if the shooter is black or brown or something else like that. But I recognize that the Republican party as a whole, and unfortunately some conservative Democrats, didn't even care about the colors of the victims. If white children in Sandy Hook could be murdered in mass and yet members of congress throw up their hands, then they clearly do not care about anything in this country. They are more in love with their guns than they are in different kinds of children in this country regardless of what color they are. That's the most disappointing and disgusting thing about the epidemic of violence we’ve seen….

Of course this is all virtue signaling at its best to push forward a Democrat agenda on guns. The left could care less about saving childrens’ lives, and their adamant support of abortion is direct evidence of that.

This is par for the course on MSNBC. Just yesterday, co-host Katy Tur actually invited her liberal guest to outright say Republicans “were responsible” for any gun deaths.