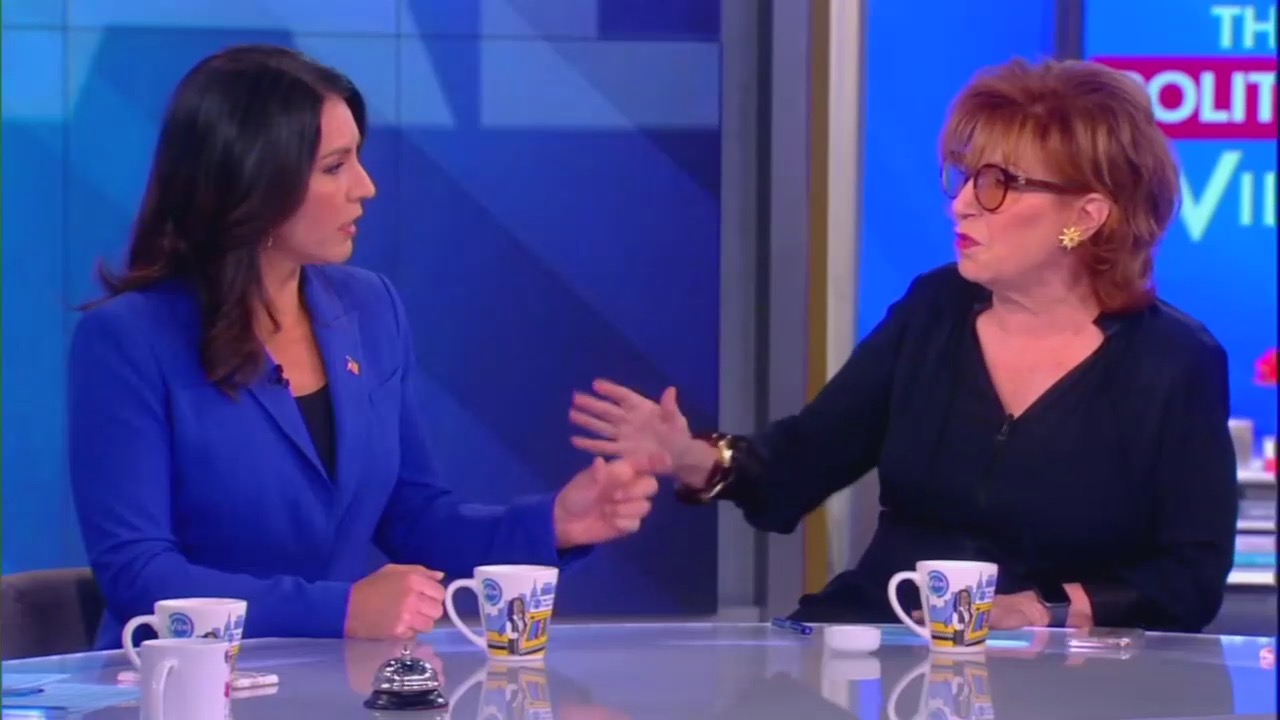 The View co-host Joy Behar defends Democrats to the bitter end, except it seems, if that Democrat believes Republicans should be treated with respect. Behar attacked Rep. Tulsi Gabbard when she came on the show Wednesday for daring to appear on “state TV” Fox News, but Gabbard pushed back against Behar’s nasty attacks.

After their 2020 Democrat guest sat at the table, Behar immediately lashed out with a laundry list of accusations:

“Franklin Graham finds you refreshing. He doesn’t find me refreshing. Richard Spencer, the white nationalist leader says he can vote for you. You were on "Tucker Carlson" at least ten times,” Behar sneered.

Gabbard argued she came to the show to defend herself against the host's false "innuendos." Still, Behar and Whoopi Goldberg, continued to run defense for Hillary Clinton, for labeling Gabbard a Russian asset.

“Are you surprised though that when people see bots and things and all the things that we have sort of been seeing heading your way, that people have these questions? Because she's not the only one. Hillary -- I don't think is the only one,” Whoopi declared.

“I want to straighten a couple of things out. I have never said, and I don’t think Hillary Clinton thinks you're a witting asset. You might be an unwitting asset. Not that that means you're stupid, but people can be used,” she claimed. Gabbard shot back, “That's exactly what it means though."

Behar kept badgering, this time, going after Gabbard for appearing on Fox News:

Gabbard slammed the notion that she worked for Russia as “offensive” and “outrageous,” before calling out Behar for dismissing Fox News’ audience:

I go on Tucker Carlson, go on Bret Baier, I go on Sean Hannity, go on MSNBC, go on CNN. I am here to speak to every single American in this country about the unifying leadership that I want to bring as president, not just speak to those who agree with me. But to speak who those who may disagree with me, recognizing that I'm asking for the opportunity to serve every single person in this country.

Behar continued complaining, “they lie all the time!”

Meghan McCain praised Gabbard for going on Fox, saying she is different from other Democrats because “she doesn’t treat us like we're garbage." Behar tried to backtrack, saying she was just talking about the “liar” hosts Carlson and Hannity.

Gabbard pointed out she appeared on Fox to talk to their audiences, while Abby Huntsman admitted, “They have some of the largest audiences on television today.”