Navarro Rages at Rand Paul: Stop 'Mansplaining' to Me About Socialism! 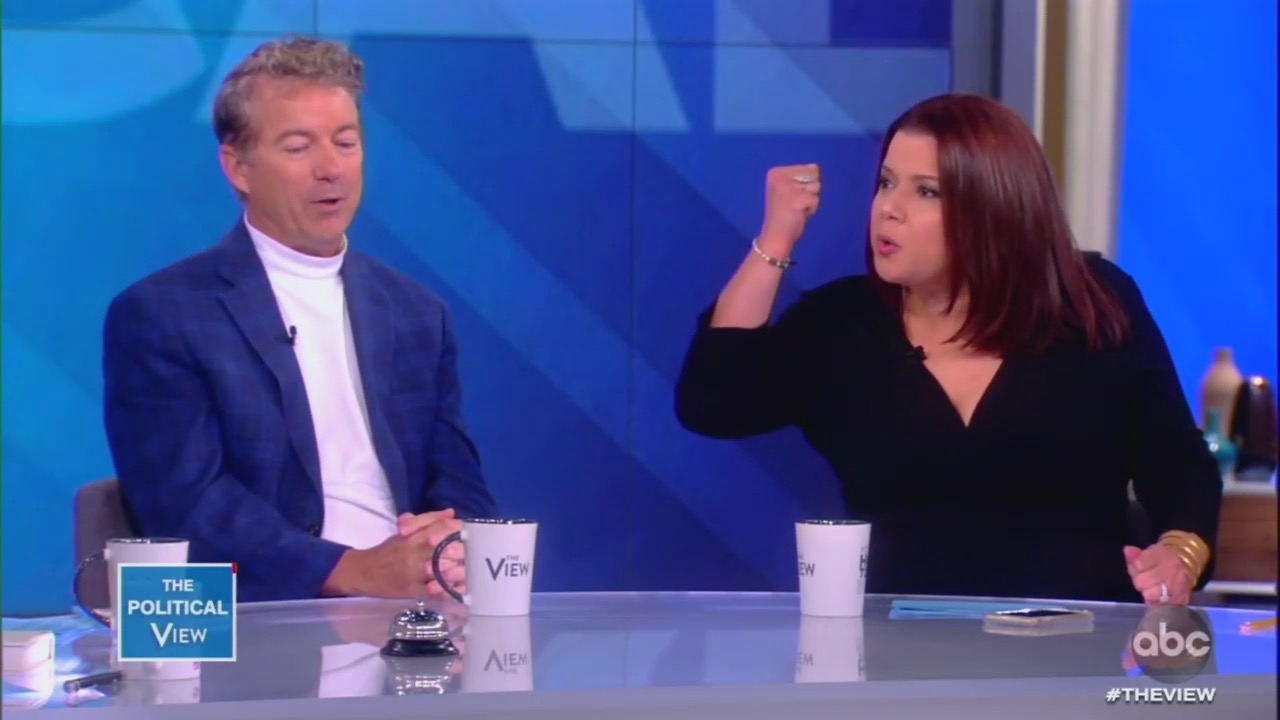 Senator Rand Paul (R-KY) came to The View on Friday to talk about his book about why socialism is wrong for America. However his ideas were so unpopular with The View hosts and audience that this part of the interview only lasted three minutes.

After discussing Syria, co-host Abby Huntsman asked Paul to answer for why “40% of Americans think [socialism] is a good thing."

[T]he Prime Minister of Denmark when he heard Bernie [Sanders] was going around saying they were socialist, he said, no. No. We're not socialists...The big difference, and this is where the big lie comes from. Bernie says we're going to give you this free stuff, but we're only going to tax the rich people. In Scandinavia, they tax the working class 25% sales tax, and an income tax starting at $60,000 is 60%. So really the difference between their country and our country is they do have more free stuff in Scandinavia, but they pay for it with massive taxes on the working class and the middle class.

Co-host Sunny Hostin complained that the working class doesn't get any "free stuff" in America:

"But we have massive taxes here, but we don't get any free stuff! We don't have free health care. Our public education system has problems. It seems like the only people who get free stuff are the very, very wealthy!" she pouted.

Paul disputed this, arguing our taxes were actually much lower for working class people compared to Europe:

"Most people blow $50,000 don't pay any income tax. The top 1% in our country pay 40%," he asserted. As the audience started to laugh in derision, Hostin touted, “Our audience says that's not true!”

Paul wasn’t saying anything new or controversial. Maybe the audience was confusing federal income tax with state taxes, (or property taxes, or self-employment taxes they may also have to pay.)

Friday co-host Ana Navarro went on to railroad Paul over Venezuela in a wild back and forth. She started griping that Republicans were trying to fearmonger about socialism by using Venezuela as an example.

After Paul asserted, “Well, if you vote for a Socialist, you might get socialism," the fake CNN Republican grew angry:

“Come on. Don't do that. Maduro is not a Socialist. He's a corrupt, murderous thug who is starving his people,” she gushed.

Paul vaguely pushed back on Navarro’s rant saying “that’s not true,” (seemingly referring to Maduro “not” being a Socialist) and Navarro promptly blew up at him:

“That's not true?! Maduro is not a thug and murderer who is starving his people?! It's not socialism!” she pouted while crossing her arms over her chest. As Paul tried to cut in to clarify, Navarro kept screaming: "Don't mansplain. I'm 47 years old."

Whoopi ended the interview at this point as the audience cheered and the other liberal co-hosts smirked in approval.