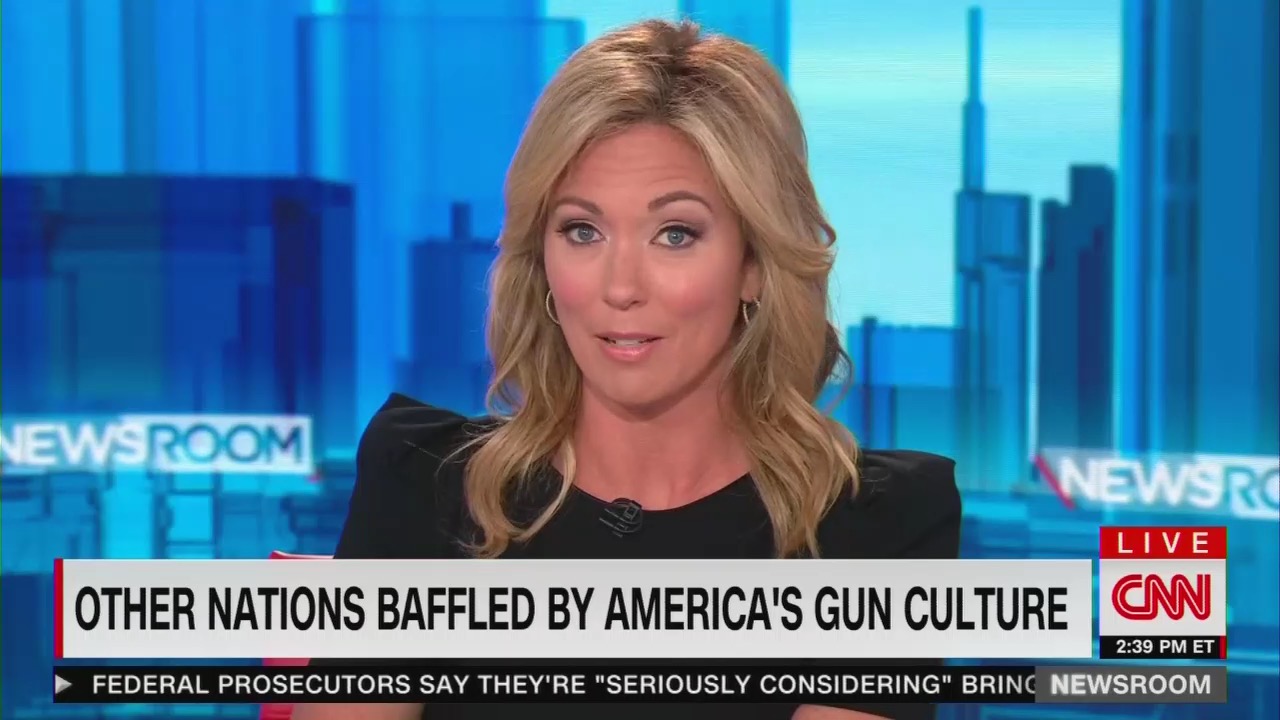 On CNN Newsroom Thursday, anti-gun host Brooke Baldwin touted Uruguay and Venezuela posting travel warnings to their citizens after the two recent mass shootings, warning about Americans "indiscriminate possession of firearms." Towards the end of the 2pm hour, she brought on an liberal comedian, Arturo Castro, to explain to the CNN audience how absurd it is that Americans have access to guns.

Castro has a sketch show on Comedy Central called Alternatino With Arturo Castro where he regularly attacks the Trump administration. In June his show made headlines for characterizing ICE as child-kidnapping terrorists. Sounds like the type of level-headed guest CNN is known for promoting on their air waves.

Brooke Baldwin first played a portion of the most recent sketch he did on his show, playing a Guatemalan immigrant student named Diego, who doesn’t understand why Americans have access to guns. She fawned over the sketch: “[I]t's clear that people who have not grown up in America's gun culture are baffled by our relationship with deadly firearms. This Comedy Central sketch perfectly illustrates that point.”

“Basically you play this Central American immigrant--You cannot wrap your head around how in America, unless you're connected with some kind of cartel, how you would get your hand on a gun? Like a massive gun!” Baldwin gushed.

Although CNN didn’t play the full clip, The Hollywood Reporter described the full sketch, which ends like this:

"If he is not in a cartel," Diego says finally, frustrated, "then where is he getting his guns?"

"You can get guns anywhere. It's America. I can get you a gun," the teacher says.

At the end of the sketch, Diego announces that he's returning to Central America: "It's super dangerous, but they have rules I can understand."

"Can't argue with that," the teacher says before turning to the topic of opioids.

To Baldwin, Castro explained that America didn’t have “laws” when it came to guns:

Yeah. Listen, in Central America there's a ton of gun violence, I've seen firsthand what it can do to a community, it's almost more systematic in that poverty equals crime equals lawlessness. America is a land of law except when it comes to weapons, right? So when we were writing about the sketch, I wanted to come from a point of the view as the outsider I am and trying to explain it to my fellow countrymen is sort of baffling.

What's truly baffling is that CNN feels like a country that's been run into the ground through socialism has the moral authority to tout how Americans got it wrong with our Constitution.