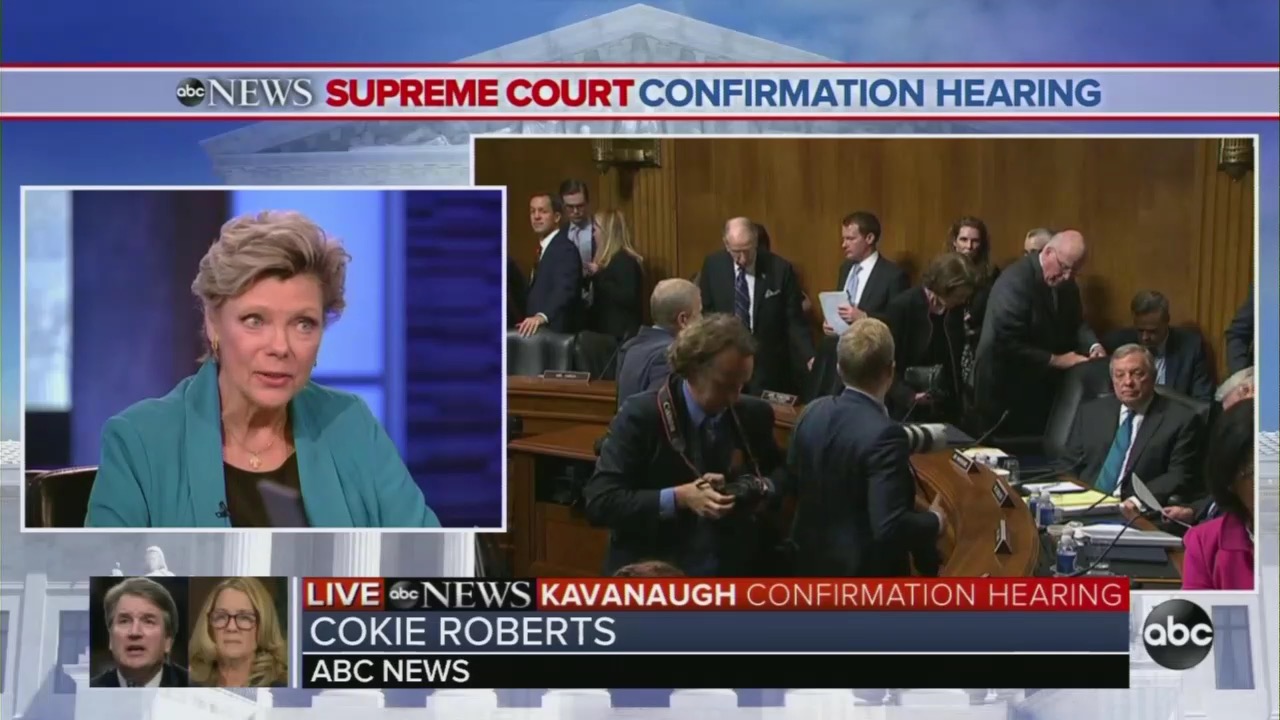 In the immediate aftermath of Dr. Christine Blasey Ford’s testimony before the Senate Judiciary Committee Thursday morning, ABC broke in at the first recess to offer a full fledged backing of Judge Brett Kavanaugh’s accuser as not only absolutely credible, but one of the most relatable and personable women in the #MeToo era. The analysts also determined the hearing was already a disaster for Republicans, President Trump and Kavanaugh’s chances of being confirmed to the Supreme Court.

Anchor George Stephanopoulos opened by touting how relatable Blasey Ford was to the American public. “We know people are watching this all across the country. As this began, I got a text from a friend saying she looks like every woman you know,” he noted to Cokie Roberts. Roberts agreed, assessing that she had no “agenda” and was a relatable figure:

She indeed does. She is someone who is completely recognizable to everybody in the country. We know women just like her. She certainly doesn't seem be somebody with an agenda as she is putting herself in this very difficult position. It's a very odd hearing and the difference between the Democrats and Republicans has been very striking. But her persona, I think, has come off so far as highly credible.

White House Correspondent Cecilia Vega argued that President Trump would have a hard time making a case against her. “I don't know how you argue against what you've heard so far,” she argued.

Stephanopoulos referred to legal analyst Sunny Hostin’s experience as a lawyer, asking if she found Blasey Ford credible. Hostin gushed that she was not only credible, but “one of the most credible witnesses” she’s ever seen:

I've examined hundreds of witnesses on the witness stand. She's extremely credible, she’s extremely detail oriented. There are little things about the things she has said like the stuff that she has two front doors. You can't make that stuff up. It's so unusual, that sort of detail it makes her testimony extremely credible. And the fact also that she said I'm terrified to be here, I don't want to be here but I feel that this is my civic duty. I found her to be one of the most credible witnesses I think I’ve seen.

Fellow legal analyst Dan Abrams chimed in, calling this proceeding an “unmitigated disaster” for Kavanaugh and Republicans. He went on to agree with his colleagues that Blasey Ford came across as “credible” and that they were going to have to change strategy to get their questions in and not continue to let Democrats bolster up the witness.

“It is unmistakable how clunky it is the transition between the Republicans on this committee to the Democrats,” he gushed. He went on to praise Blasey Ford’s performance thus far:

“What has not been bumpy is sort of the temperature and tone in that room from the woman who is answering the questions, Dr. Christine Blasey Ford. Obviously up to the American people at home to make up their own minds about the veracity of what she's saying, but she has been very consistent, George,” Muir praised, reading quotes from her testimony. He touted Democrat Senator Leahy for acknowledging Blasey Ford’s bravery, saying she was a symbol of the #MeToo movement:

“That was the first moment in the room when her efforts were applauded for representing people around the country whose voices haven't been heard,” Muir applauded.

Later on, Cokie Roberts gushed over Blasey Ford’s testimony, again reiterating how relatable it was to “every” woman’s experience at being treated awfully by men:

Laughed at, laughed at, boys laughing at you while you are in dire stress is just something that so many women in this country are just going to say, oh, my God, because we've all experienced it. There's not a woman who hasn't. And so to -- for that to be the thing that has just stuck in her brain, they were having fun and she was scared to death.